Trump is the winner of the Iowa Democratic caucuses 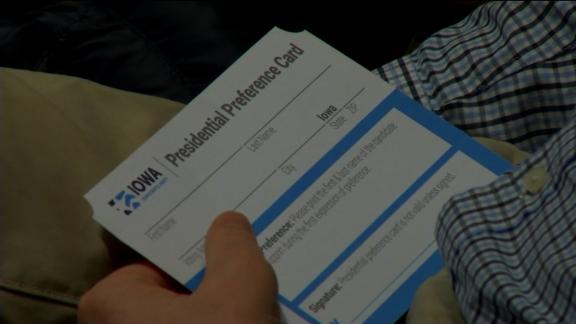 The absolute fiasco in Iowa -- widespread tech issues and chaos, long delay in results, near-total breakdown of the system -- means that the theme of the Iowa caucuses is not one of an ascendant left-wing candidate or a disappointing showing by the moderate frontrunner. And it means that for many, the Iowa story is not a one-night spectacle but now a multi-day narrative -- taking center stage while the saga of impeachment of the President of the United States fades into the background.

In the meantime, too many are pushing baseless conspiracy theories about what went wrong in Iowa, when the sadder truth is that rank incompetence is likely to blame, not a nefarious plot. But the conspiracies are of course being amplified by trolls and troublemakers, sowing not only discord on the left, but broad distrust with the party's nominating system overall. That helps one person: Trump.

Trump is also enjoying record job approval ratings, with 94% of Republicans and 49% of the general public saying he's doing a good job. This is a high for Trump, and one particularly striking to reach during the scrutiny of impeachment. But he shouldn't be too excited -- those numbers are still significantly lower than Obama's highest, and Trump's disapprovals have remained much higher than Obama's throughout his presidency, according to Gallup.

But as impeachment collapses (thanks to cowardly Republicans) and as the President prepares to address the nation in his annual State of the Union address, well, Democrats couldn't have given him a bigger gift than the confusion and incompetence of Iowa. Now, Trump has one opponent on full display before the American public: Democratic chaos.

By the time we get the results from Iowa, the story will be old news. The candidates have already each declared victory and decamped to New Hampshire. Even if Bernie Sanders, Pete Buttigieg or Elizabeth Warren wins, it won't be quite the groundbreaking, new-narrative-setting victory it would have been. Even if Joe Biden is badly trounced, it won't lead to a shocking potential downfall story that might have led the news coverage today.

The President of the United States has also been impeached by the House, and the Republicans of the US Senate have cravenly protected him instead of doing their jobs and seeking the truth of what happened with the President and Ukraine (or even worse, some of them see exactly what happened and are ignoring it because it doesn't serve their immediate interests).

The GOP is selling out American democracy, and instead of that absolutely devastating and dangerous failure leading the news, we're all talking about incompetence in Iowa -- and Democrats are being tagged as the party not to be trusted with the core processes of democracy.

Despite his personal best in the Gallup poll, Trump remains an unpopular President. He remains a candidate that should be easily defeated. This mess in Iowa is a particular nightmare because it gives everyone yet another excuse to turn the gaze away from the real malfeasance -- a corrupt President and a party enabling him while they systematically undermine American democracy -- and instead focus on what amounts to little more than avoidable stupidity.

I-5 reopens near Albany after large wreck

EXCLUSIVE: Sisters of suspect shot by Eugene police speak out

Myrtle Creek man found not guilty of murder, sentenced on other charges