An unconventional candidate could be just what Democrats need 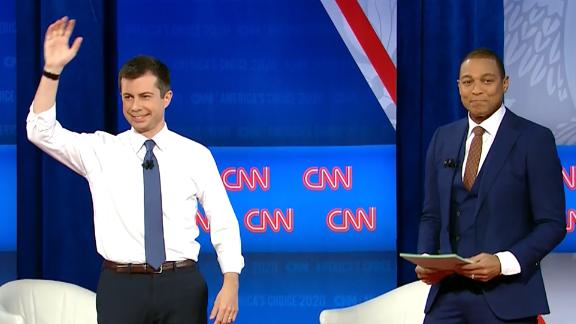 During a CNN town hall in South Carolina, Democratic presidential candidate Pete Buttigieg answers an audience question about why people and women of color should trust the former mayor of South Bend, Indiana.

Monday night, the two Democratic frontrunners each had a turn to speak to South Carolinians a few days before a critical primary, and to make their case to the rest of the nation as Super Tuesday approaches. Stepping before the cameras, Sen. Bernie Sanders and Mayor Pete Buttigieg offered two fundamentally different political styles, one rooted in the tumult of 1960s grassroots activism and the other in the pragmatic, computer savvy mentality of the Millennials.

Sanders is a movement politician who draws his energy and excitement from his base. He carries on the ethos of 1960s progressives who, long after the Age of Aquarius, continued to fight for the ideals that animated younger Americans in that decade. They were perpetually taking on the establishment. Sanders is clear-headed and consistent about the struggle for social justice, economic fairness, and democratic rights. He sees the world through the prism of right and wrong with little gray in between.

Even though he has been a "democratic socialist" for most of his political life, Sanders has been an unabashed enthusiast about the New Deal and Great Society traditions, promising to push those agenda to deal with issues that have been at the forefront of recent mobilizations, such as the environmental movement. Sanders believes that the only way to win an election, especially one against an incumbent president who will be as ruthless and vicious as Donald Trump, is to tap into the fervent energy of a movement to win control of the White House.

Meanwhile, Buttigieg is a child of the 1980s and 1990s, not the 1960s. He approaches politics in a clinical style, constantly attempting to bring the most sophisticated data-laden analysis to the problems that we face. He promised to provide intelligent, thoughtful and realistic solutions as the leader of the country.

In stark contrast to Sanders, Buttigieg rarely speaks with the passion of a movement leader, preferring instead to use a professorial, analytical style in addressing everything from race relations to economic hardship. Although he left McKinsey, McKinsey never left him. During events like Monday night's town hall, he speaks about issues, such as the filibuster, as a puzzle that needs to be solved rather than a fight that must be had. While Buttigieg can sometimes be bold in his prescriptions, he has trouble speaking from the heart.

It remains unclear whether either political style will be the one that is right for this particular moment in American history, when the stakes of a second Trump term seem so high that Democratic voters are somewhat hesitant to take a risk with either one. On the one hand, voters fear that an idealistic leader of a movement will fall directly into the crosshairs of President Trump's strategy to present his opponents as radical. On the other, the pragmatic problem solver will never have the grass roots passion that is needed to take on a president with such an animated base.

But it could be that in these troubled times, the Democratic electorate prefer candidates who are different than the standard, middle of the road selection. They might just decide that the best way to take on someone as unpredictable as President Trump is to step out of the box and bet on a candidate who will offer a different kind of campaign on the road to the White House.

Congressman DeFazio will not seek re-election

OHSU researcher: Only a matter of time until COVID variant omicron reaches Oregon

Mother, partner charged with murder of 9-year-old girl in Oregon

'You’re not alone': Many navigating grief during the holidays