How Trump should be handling this crisis 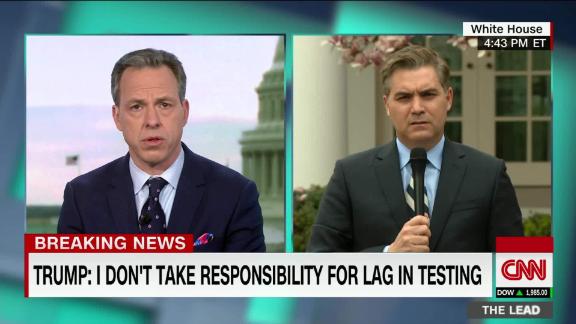 The Trump administration's communications effort around the coronavirus has been nothing short of a disaster to date. A failed Oval Office address on Wednesday that necessitated multiple corrections from White House staff was followed by a press conference on Friday, which the President delivered in the Rose Garden, surrounded by public health experts and business leaders.

While the President and his coronavirus task force addressed some pressing issues like testing, many questions remain as we deal with this public health crisis. As critical as that is, we also need to focus on the crisis of public confidence.

Given my experience -- I served as former President Bill Clinton's press secretary and spent two decades representing organizations dealing with crises -- I believe there are a number of steps the White House can take to restore public confidence in our health care system.

First of all, stop the practice of self-congratulation. The President has repeatedly praised himself for stopping flights from China -- as if that has solved the problem. Vice President Mike Pence in particular seemed more intent on praising the President than delivering useful information to the American public on Friday. Pence said, "Thank you, Mr. President. It is -- this day should be an inspiration to every American ..." and went on to thank Trump for his "leadership" and "decisive action."

Americans want to know what you are going to do, not what you've already done. There is no sense that anything this administration has done has stemmed the tide of the virus. Public communication should be forward-looking at this stage, and while Friday's press conference introduced some sensible initiatives like drive-through testing, the details regarding the implementation were vague.

Deliver accurate and trustworthy information, and do so on a regular basis. The President has been consistently wrong when talking about the pandemic and our response to it, whether it's falsely claiming the availability of testing kits, or consistently underplaying the risk Americans face.

So far, inconsistent messaging has sparked confusion and panic. While state and local officials have done great work to date, there is no substitute for accurate and timely information from the federal government. We can't afford 50 different solutions, or leave the decision-making on keeping Americans safe to sports leagues and individual companies.

Being honest and straightforward is important -- Americans can handle the news, however bad, if it's given to them straight. This will foster trust among the public and allow people to make informed decisions.

Having lost credibility on this issue, the President needs to take a step back and let the experts do the talking. My recommendation would be for Dr. Anthony Fauci, director of the National Institute of Allergy and Infectious Diseases, who has retained the public trust, to serve as the official spokesperson for the federal government and deliver at least two public briefings a day.

Avoid partisanship or playing the blame game. The President has failed in this regard, having blamed everyone from the European Union to the Democrats.

While the President was calling for national unity, his 2020 reelection campaign was busy promoting a Washington Times column calling Joe Biden a "rotting corpse of a candidate."

And when pressed about the lack of widespread testing at Friday's press conference, the President pivoted to blaming the previous administration -- inaccurately -- for problems his White House could not solve. The President will ultimately be judged by how the country prepares for and mitigates the damage of the spreading coronavirus. Conversely, the President should know that if he drops the ball, no amount of blaming others will improve the situation.

Utilize all the resources available to address the crisis. The President must make it clear to everyone in the federal government that this is the first, second and third priority for the administration. The bureaucracy of government in normal times can slow things down to a crawl, and a virtual kick in the ass from the President would be useful in challenging times.

When it comes to resources, it helps to think out of the box. The President is the commander in chief. If he can use the military to guard our southern border, he can use the military and its thousands of doctors to solve the testing problem we are facing. The military also has extensive experience in setting up mobile hospitals, which will be necessary if the growing number of coronavirus cases overwhelms our existing health care system. Or perhaps we could mobilize the now dormant cruise ship industry to serve as floating hospitals. The contributions of corporate America described at Friday's press conference -- even just plans for the use of parking lots at retailers for drive-through testing -- was a good first step. The bottom line is you have to do everything you can.

Finally, own up to any missteps to date. The public knows this administration has fumbled the coronavirus response. Being candid about past mistakes is a critical to regaining trust. This may not be in the President's DNA, but he needs to learn quickly. He missed multiple chances at the news conference to acknowledge any responsibility for what has not been done and why the response has been slow.

Right now, the country needs the President to be functioning at peak performance. Even if he cannot serve as the primary spokesperson, he needs to wield the incredible power of the presidency to address this public health crisis.

He needs to set an example and then stick to it. If health officials issue guidance to avoid shaking hands or get tested after coming in contact with someone who has tested positive for the coronavirus, then the President should set an example and model that behavior.

No President is oblivious to the political implications of any action. In this case, the fortunes of the President are directly tied to meeting this challenge. And the best way Trump can make the most of this is to stop playing politics and just do the job.