A lot of Americans like Trump's handling of crisis 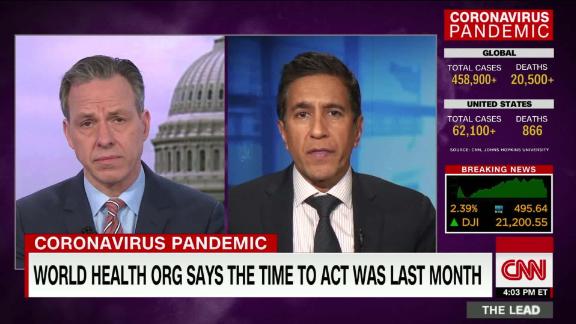 As the coronavirus crisis unfolds and media and Democratic bashing of President Donald Trump continues, a curious thing is happening -- his numbers are going up.

The Gallup poll this week recorded its highest ever job approval for the President (49% approve, versus 45% who don't). Likewise, Trump is generally getting decent marks on his handling of the pandemic, with Gallup showing 60% approval on the subject.

The question is -- why? Trump has lived in a very tight job-approval zone for most of his presidency, hovering around 42-43% among registered and likely voters. But today, FiveThirtyEight's Trump job approval tracker shows him with an average approval of 44.9% and the RealClearPolitics tracker has him at 46.3%.

He's been lifted, apparently, by his handling of the coronavirus, and perhaps by his opposition's mishandling of it. I think a few things are at work, and a smattering of each could easily explain his lift:

1. In its reporting on the pandemic, as with most issues, the press along with Democrat politicians have gone overboard criticizing the President. And because neither of those institutions is all that trusted by the American people -- 45% of respondents in a CBS poll this week said they think the media is overreacting -- they may see that overreaction as a signal that Trump has got this. Some 51% in the CBS poll said they think Trump is "about right" in his reaction to the crisis.

2. The Democratic rush to call the President racist over his terming the Covid-19 disease "the Chinese virus" backfired. In their quest to make just about every issue about race, Democrats fell all over themselves calling Trump -- and anyone else who called the virus "Chinese" or "Wuhan"-- racist, despite evidence that the virus did indeed, originate in China. After Trump imposed travel restrictions on people arriving to the US from China to stop the virus's spread, former Vice President Joe Biden, Trump's presumptive opponent, tweeted: "A wall will not stop the coronavirus. Banning all travel from Europe -- or any other part of the world -- will not stop it. This disease could impact every nation and any person on the planet -- and we need a plan to combat it." At a town hall meeting, he said "this is no time for Donald Trump's record of hysteria and xenophobia, hysterical xenophobia ... and fearmongering."

And all this despite the fact that it is pretty well documented that the Chinese government misled, witheld information about the virus and tried to cover it up, essentially unleashing the pandemic on an unprepared world. In their rush to condemn every Trump decision as racist, Democrats wound up looking like out-of-touch partisans.

3. People are giving the President some latitude here. Americans were caught off guard by this virus and don't blame Trump for its arrival at our borders. And because it is such an unusual event, they are giving the federal government some room as it figures out how to handle it. If you hate Trump already, you will conclude that no matter what he does it must be wrong and was done with impure motives. But for the large percentage of Americans who don't hate him for living, his administration is being allowed some grace time as it feels its way through an unprecedented situation.

4. Trump is processing this the way a lot of people are. Trump does this out loud, and this may match up better with the average American's thinking more than Democrats want to believe. An average voter might hear Trump's press conference and think: "He's probably reacting the way I would." This includes confronting the twin concerns of saving lives but also the American economy. It's a tricky balance and many if not most people are having these conversations in their own houses and minds.

5. Democrats trying to cram liberal nonsense into the relief bill was a major blunder and it did not go unnoticed by the American people. Amid what everyone agrees is a crisis and an emergency, House Speaker Nancy Pelosi held up a $2 trillion relief bill in an attempt to lard it with non-germane items that should have shamed and embarrassed every member of her party. Demanding diversity on corporate boards, carbon emission offset demands of the airline industry, and millions for the Kennedy Center, to name a few. I suspect the American people, watching and reading more news than usual, caught on to this ridiculous power grab pretty quickly and reacted negatively.

We'll see if the President can hold this uptick in his numbers, as the pain in our economy is just now manifesting itself in millions of American households. How he handles the twin issues of public health and reviving a reeling economy will make or break his reelection. There's nothing else for him to do except get this right, and if you believe the recent polling, an increasing share of the American people may believe he is on his way to doing just that.