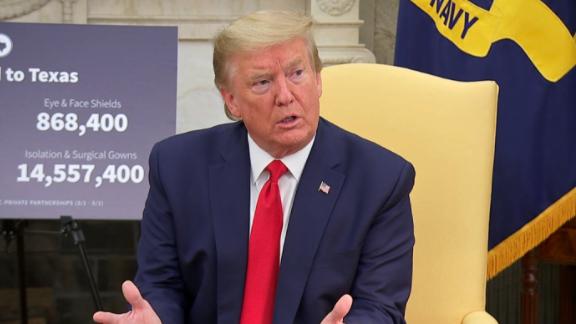 The danger is inside the house. A member of the US Navy who serves as a valet to President Donald Trump has tested positive for Covid-19. This means the deadly virus has likely circulated in the White House living quarters, threatening the president's health and, perhaps, the denial that has marked his response to a pandemic that has killed nearly 75,000 Americans in less than four months since he declared, "We have it totally under control."

News of the valet's diagnosis broke two days after Trump toured a protective mask factory in Phoenix, Arizona, where he chose to forego wearing one himself publicly, despite the Centers for Disease Control and Prevention's guidance to do so. As a loudspeaker blared the song "Live and Let Die" (a Trump campaign staple), he mingled with workers and executives at the factory, often getting closer than the six feet recommended by the CDC's social distancing guidelines. Trump, who said he had little personal contact with the valet, has since tested negative for the coronavirus, according to deputy White House press secretary Hogan Gidley.

Trump's behavior, and the valet's diagnosis, raise obvious questions. Will 1600 Pennsylvania Avenue become a Covid-19 hot spot? Did Trump take the necessary precautions on his trip to Arizona?

Masks have become an emblem of a pandemic culture war. On one side are protesters, sometimes armed with guns, who have gathered at state capitols to demand an end to the shutdowns that were ordered to stem the pandemic. Many of these folks reject the use of face masks. On the other side, are those who willingly wear them, maintain social distancing guidelines and honor stay-at-home orders in order to do their part for the country.

President Trump has tried to straddle both sides of the culture conflict, voicing support for the official White House recommendations but signaling in his behavior that he really stands with the protester, whom he called "very good people." Add the fact that Trump has never been photographed with a mask, and you know where he really stands.

Behind the president's dissonance lies the bigger problem of denying the full reality of the pandemic and trying to make it disappear with spin. Trump spent many weeks insisting there was nothing to worry about. Who could forget when Trump attended a roundtable event in February and said, "We have done an incredible job. We're going to continue. It's going to disappear. One day -- it's like a miracle -- it will disappear"?

When the virus didn't disappear and instead killed so many Americans that some of their bodies had to be stored in refrigerated trucks and other makeshift morgues, the president made himself the star of the daily coronavirus briefings. In this role, he repeatedly denied problems with testing and hawked an unproven treatment that was later found to be ineffective for Covid-19 patients. When he humiliated himself with comments about treating the virus with light or disinfectants inside the body, he briefly stepped away from the spotlight. This week, Vice President Mike Pence touted the "tremendous progress we've made as a country," and announced the coronavirus task force would be phased out. Trump, meanwhile, credited Pence and the task force for having "done a great job."

Only the king of denial would look at what had transpired during the task force's tenure -- skyrocketing caseloads and death counts matched by ongoing shortfalls in testing -- and consider it a job well done. After the ensuing backlash over the decision to disband the task force, Trump suddenly reversed course and said the group would continue "indefinitely" -- a decision he said he made after learning "how popular the task force is."

Trump's incessant flip-flops -- along with his habit of denial and spin -- have always been destructive. But this behavior has grave implications during a pandemic that is claiming the lives of thousands of Americans and taking a toll on the financial security of millions more. This pattern has been on full display as Trump focuses on reopening the economy despite warnings it could spark a surge in coronavirus cases. The president announced guidelines in mid-April to help states determine when to loosen their social distancing restrictions, only to turn around tell governors they would be calling their own shots. This week, the White House shelved a more detailed CDC report on how to reopen the economy after asking the agency to provide guidance. And despite projections the coronavirus will send the US into a deep recession, Trump has already touted a "comeback," saying, "I think we're going to have, economically -- from an economic standpoint, next year -- an unbelievable year. And I think that you're going to see a fantastic fourth quarter..."

One would hope that the valet's test results would force the president to confront the reality of this pandemic. Every diagnosis is a tragedy, so we parse the impact of this one at some peril. But if something good can come of it, we hope that Donald Trump will think about the person he knows and decide to act as a president who takes responsibility for this great crisis.

In the 17th century, the famous French wit Anne-Marie Bigot de Cornuel observed, "No man is a hero to his valet." This is just as true today, in the White House. But should the suffering presidential valet recover, and change how Trump thinks about the pandemic, he would be a hero to us all.