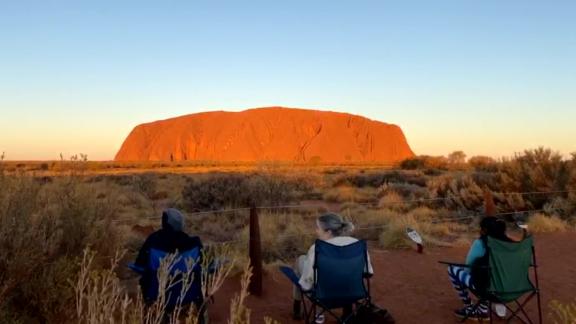 Tourism Australia connected couches across the country with a live stream of crocodiles, cooking classes and Chris Hemsworth workouts. The virtual event, "Live from Aus," is part of an ongoing push by Tourism Australia to inspire Aussies to travel locally when it is safe to do so. CNN's Lynda Kinkade reports.

When we do go outside again, what will it be like?

Over the May 16-17 weekend, Tourism Australia -- the country's national travel organization -- called upon a couple of well-known mates to connect couches across the country and answer that very question.

Streamed on Facebook, the virtual event "Live from Aus" transported viewers to 36 destinations down under. The two-day program was filled with famous Australian travel experiences and hosted by zookeepers, chefs and even a pair of Chris Hemsworth's personal trainers.

Matt Wright, an animal expert who is known for hosting the TV show "Outback Wrangler," introduced those tuning in to a couple of crocodiles before taking to the sky to showcase the best of the Northern Territory.

"Everyone has been cooped up in units and apartments, so what we have is very appealing in terms of the wide-open spaces and beautiful landscapes," Wright told CNN while a crocodile snapped playfully at his feet.

It's all part of an ongoing push by Tourism Australia to inspire Aussies to travel locally once it is safe to do so.

The coronavirus pandemic has halted international travel for the foreseeable future. But, as restrictions begin to ease in Australia, domestic travel is being seen as a big step forward in the road to recovery.

"We are a nation of travelers. Australians took 6.5 million outbound trips last year. There is a real opportunity to encourage those people, taking those trips, to discover their own backyard."

"The restart of travel is going to be gradual. We will start with a day trip to enjoy local gems or have a food and wine experience. That will then progress to overnight stays locally and then potentially inter-state. Then, hopefully in the long term, international travel."

A model for the US?

Australia has been largely praised for its ability to "flatten the curve," with attention now turning to whether the country can avoid a second wave of Covid-19 infections as restrictions begin to relax.

Earlier in the month, Prime Minister Scott Morrison argued that the country "cannot allow our fear of going backward stop us from going forwards."

With a three-stage plan to re-open now in place, Morrison is hoping to reach the final phase of his road map by July. This would see the majority of workers back in offices, pubs and clubs open, gatherings of up to 100 people and interstate travel.

A trans-Tasman "travel bubble" between Australia and New Zealand will also be considered at this point. However, while that is the goal, states and territories will individually determine when to progress through the three stages.

If successfully implemented, Australia's roadmap and focus on domestic travel is likely to be eyed as a recovery role model for other countries, including the United States.

"We are seeing overall domestication of travel. It is certainly the immediate opportunity for any travel industry around the world," Harrison said. "I think it is a big opportunity for the US market."

However, unlike other countries, Australia's push to travel local pre-dates the coronavirus outbreak.

Australia's first Covid-19 case was confirmed amid the worst bushfire season on record. The damage: 18 million hectares of land burned, with at least 33 people and over a billion animals killed.

The devastation came on the back of crippling droughts, pushing many regional and rural areas to breaking point.

A $10 million Kylie Minogue Tourism Australia ad, hoping to convince Brexit-weary Brits to visit Oz, was quickly derailed. Tourism Australia instead pivoted to a "Holiday Here this Year" campaign in a bid to support fire-impacted regions.

But Australians were unable to answer that call. Less than two weeks after the last bushfire blaze stopped burning, the country went into hibernation.

"Tourism in Australia accounts for one in 13 jobs. The whole industry virtually shut overnight," Harrison says. "In the absence of that, regional communities especially are really suffering... Tourism is their lifeblood."

The first issue concerning the return of leisure travel is, understandably, safety.

"Once we show people it is safe to get out and travel, we think people will come back at scale," Harrison reasoned. "They key to that will be how the industry responds, and the protocols they put in place to ensure guest safety. We, as an industry, are working very hard on that."

With Aussies beginning to venture out of the house for day trips, food and wine experiences are predicted to be the first course on the holiday at home menu.

Matt Stone and Jo Barrett are co-executive chefs at one of the country's most celebrated restaurants, Oakridge, which is in the Yarra Valley region northeast of Melbourne.

Joining "Live from Aus" for a dash of cheese-making in their kitchen, the chefs said they understand the responsibility of re-opening.

"People are being cautious and wanting to follow the rules to ensure we all come through this together," Barret explained, "But there is definitely an urge to get out. Like true Australians, we will support the restaurants that do need it."

Chinese visitors make up the largest demographic of travelers visiting Australia. The loss of foreign visitors, coupled with restrictions on restaurant headcounts, is a key concern for many food destinations.

"We are going to change the way we do things," said Stone. "We are going to get a lot of great support from locals, and then domestic travels from there. We will scale up as the laws and the restrictions scale up. It is a matter of adapting."

It's not just people who are feeling lonely amid the lockdown.

"There is no doubt that some animals are desperate for people to come back," said Chad Staples, a zookeeper at Featherdale Wildlife Park outside of Sydney.

Speaking to CNN while cuddling a koala, Staples said he hopes to re-open the zoo in the next four weeks.

"The start of this year and end of last year was pretty horrendous for our native wildlife. Fires that had never been seen before... potential extinction events really," said Staples. "It's been a challenging year. To then get hit with this [coronavirus]... it's hard to take.

"But like always, we are on the way back," Staples added. And "we" doesn't just mean the zoo -- it means all of Oz.

Spirit of Whiteaker dinner lives on in smaller, pandemic-friendly form