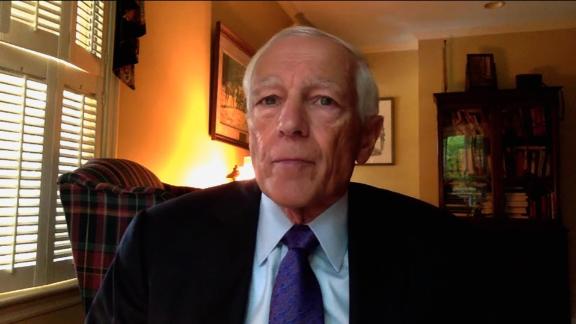 Retired Gen. Wesley Clark responds to former Secretary of Defense James Mattis' released statement in which he said Americans must come together without President Trump.

"Donald Trump is the first president in my lifetime who does not try to unite the American people -- does not even pretend to try. Instead, he tries to divide us," Trump's former Secretary of Defense said in a statement obtained by CNN. Mattis described the president as a threat to the Constitution. "We are witnessing the consequences of three years without mature leadership. We can unite without him, drawing on the strengths inherent in our civil society. This will not be easy, as the past few days have shown, but we owe it to our fellow citizens; to past generations that bled to defend our promise; and to our children."

Mattis has largely kept his criticisms of the president silent after resigning over policy differences last year. But as President Trump grows desperate to distract with lies and bluster against a backdrop of a fumbled pandemic response, cross country protests against police violence and his own sagging poll numbers, silence among the center-right is increasingly untenable. Even Republican Sen. Lisa Murkowski of Alaska broke ranks to say that she agreed with Mattis and said she was struggling on whether to support Trump in November.

The tipping point was Trump's autocratic stunt of violently dispersing a peaceful protest outside the White House for a photo op with a Bible minutes after suggesting he would invoke the Insurrection Act to use the US military against American citizens. This sparked an unusual firestorm of dissent from respected military and national security figures, who have been trained to remain silent on matters of partisan politics.

A former chairman of the Joint Chiefs, Martin Dempsey, felt compelled to write on Twitter, "America is not a battleground. Our fellow citizens are not the enemy." The Bush and Obama-era chairman of the Joint Chiefs, Admiral Michael Mullen, wrote an op-ed for The Atlantic, saying "Whatever Trump's goal in conducting his visit, he laid bare his disdain for the rights of peaceful protest in this country, gave succor to the leaders of other countries who take comfort in our domestic strife, and risked further politicizing the men and women of our armed forces." Retired Marine Gen. John Allen said that Trump's threats of military force may be "the beginning of the end of the American experiment." Former CIA analyst Gail Helt told the Washington Post, "This is what autocrats do. This is what happens in countries before a collapse. It really does unnerve me."

This is not partisan bluster. This is the sound of lifelong patriots warning that this president's autocratic impulses are a threat to the republic.

The military is typically sympathetic to Republican presidents, with military veterans voting for Trump by an almost 2 to 1 margin over Hillary Clinton in 2016, according to CNN exit polls. Despite dodging the Vietnam-era draft with claims of "bone spurs," Trump has repeatedly tried to claim that he is the "most militaristic" candidate and president (watch this Seth Myers' monologue mash-up for some choice cuts)

There is no obvious precedent for their actions. Even the most senior enlisted man in the Air Force, Chief Master Sergeant Kaleth O. Wright felt compelled to speak out in solidarity with protesters.

Wright tweeted, "I am a Black man who happens to be the Chief Master Sergeant of the Air Force. I am George Floyd...I am Philando Castile, I am Michael Brown, I am Alton Sterling, I am Tamir Rice."

Wright's tweet stood in sharp contrast to President Trump's calls for shooting looters and warnings of "vicious dogs," though he has claimed to want justice for Floyd.

These profiles in courage represent cracks in Trump's core foundation of support in a time of national crisis. A recent Monmouth University poll shows that President Trump is down double digits to former Vice President Joe Biden (other polls have shown Trump in the lead despite his fact-free insistence to the contrary)

But nearly all Republicans in the allegedly co-equal branch of government known as the US Senate have essentially continued their see-no-evil routine, pretending to ignore that their emperor has no clothes. When asked by reporters for their reaction to Trump's thuggish response to peaceful protesters outside of the White House, they offered a series of almost comical dodges, with Sen. Ron Johnson of Wisconsin saying "I didn't really see it," while Sen. Rob Portman of Ohio said "I'm late for lunch." Cue the sad trombone soundtrack.

There were a handful of dissents, including Sen. Murkowski, who said "I did not think that what we saw last night was the America I know," while Nebraska Sen. Ben Sasse said, "I'm against clearing out a peaceful protest for a photo op that treats the word of God as a political prop."

Republicans are caught in a hyper-partisan trap of their own making. They are afraid of provoking the president's wrath as well as the anger of the base despite the fact that what Trump is doing is against everything they once said they believed.

Remember Republican concerns about the generational theft of deficit and debt and the tea party rallying cries against bailouts at the outset of the great recession? They apparently don't -- or they're hoping that no one will notice the bigger deficits and debt and bailouts under Trump. Never fear, they'll resuscitate the issue under a Democratic president. During the Obama years, one fringe conspiracy theory, known as "Jade Helm," baselessly accused former President Obama of conspiring to use the military against US citizens, attracting the interest of Senator Ted Cruz.

Now that President Trump has called for something that looks a lot like that in reality, the Republican response is crickets.

The unfortunate but obvious answer is these alleged Republican principles were just about the partisan pursuit of power. Too many of them were willing to sell them out in a second, amid a flurry of whataboutism and fact-free denial for short-term political gain. But that deal looks like it might end in electoral disaster.

There is a reflexive impulse on the right to demonize Donald Trump's detractors. But this runs into a buzz-saw when it comes to high-ranking members of the military calling out the president's self-serving violations of democratic norms. Crowing about "owning the libs" loses a bit of its luster when its directed at former Trump cabinet members and Pentagon chiefs who know the president far better than the fan fiction his hardcore supporters have embraced. The partisan economy creates its own cudgel among operatives who agree to overlook their onetime libertarian principles as long as the paychecks keep rolling in.

As we head closer to November, more center-right politicians may start to show spine out of a desire to not get taken down with the rapidly derailing Trump train. Others will come down with cases of convenient amnesia, but the military voices already speaking out remind us that protecting our country is a much bigger deal than phony-tough fealty to hyper-partisan politics.

2021 Winter Forecast: This winter set to be colder and wetter than average

Nearby robbery leads to lockout at Sheldon High