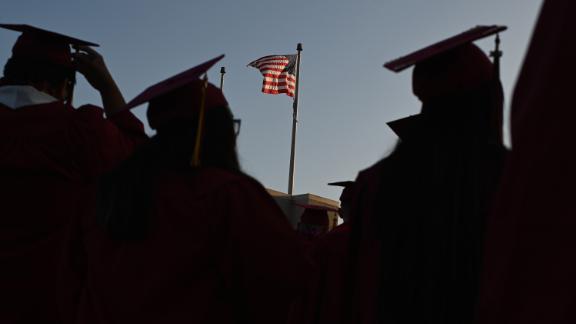 International students in the United States could be made to leave the country if their universities decide to only offer online courses, Immigration and Customs Enforcement has announced. CNN's Jessica Schneider reports.

This week, Immigration and Customs Enforcement (ICE) announced new rules requiring international students to leave the United States if their colleges or universities institute online-only learning measures for the fall under the threat of Covid-19.

It's another disgusting, transparent Trump administration attack on foreigners and immigrants, one that is solely about malice -- and one that further diminishes the United States' influence and reputation while putting human life at risk.

With Covid-19 infections still raging across the country and on the rise in multiple states, colleges, universities and vocational programs are making tough decisions about the 2020-2021 school year.

It's clear that in normal times, in-person classes have significant benefits over online ones. But these are not normal times and pulling large groups of students together in lecture halls is a practically ready-made scenario for Covid-19 transmission.

Institutions of higher learning have an obligation to educate their students, and an obligation to keep them -- along with their faculty and staff -- safe. That means many are making the difficult and imperfect choice to put health first, and convene classes and lectures online. No, it's not ideal for everyone. But it's a heck of a lot better than mass illness and death.

This administration disagrees. This feckless, ignorant President has already botched the Covid-19 response to a degree that would have been unimaginable under any previous executive in modern history.

And he still doesn't seem to get it: He's more concerned with his ratings and the appearance of normalcy than with taking the steps and making the hard choices that will save American lives and allow us, eventually, to return to actual normalcy.

When colleges and universities take their classes online, that signals to Americans that we aren't safe yet. And this President seems to believe that's bad for his election chances in November. He tweeted in all caps Monday that schools "MUST OPEN" in the fall.

At a broader level, this development shows how the Trump administration is capitalizing on Covid to support its long-standing anti-immigration agenda. This administration has already taken numerous steps to make the United States, a nation that owes so much to immigrants, less welcoming to those who would come to our shores.

The President's travel ban on some majority-Muslim countries was met with protests across the nation, but after a little tinkering, the ban stood.

The administration notoriously implemented a family separation policy that ripped children from their migrant parents, and threw many of them into bleak detention centers. At least seven children have died in immigration custody, and yet prominent members of the Trump administration reportedly have made clear that they are unmoved by the plight of families who suffer from this widely condemned and devastating policy.

This new rule will force thousands of students from other countries to return home if their colleges don't offer at least a hybrid model of in-person class time and online class time. The logic seems to be that students don't need to be in the US if they aren't going into a classroom; they can log on from anywhere.

Except, of course, they can't. Many international students rely on their school for consistent and free Wi-Fi; going home would mean limited or unaffordable internet access, or for many, no internet access at all. Students from developing nations or rural countries may not have internet.

Countries like China, for example, radically restrict what internet users can access, potentially making it impossible for students to complete their research and coursework. And any student from the many nations outside of the Americas is going to be looking at an online class schedule that will be, for them, at all odd hours and in the middle of the night.

And those are the lucky ones. Internationals are from a variety of backgrounds; they include refugees, students whose homelands have devolved into conflict, students whose countries of origin have been devastated by disaster, and students from extreme poverty. Not every international student has a home they can go back to.

Not to mention the global health risks of forcing thousands of people from one of the countries hardest-hit by Covid-19 onto airplanes bound for every corner of the world. It's not clear that many of these students could even get back home if they wanted to, with nations closing airports, suspending flights, and seeing US travelers as particularly risky.

But it's not just international students who are hurt by this policy; it's Americans, too, and our national interests.

Having a wealth of experience, talent and perspective from a diverse student body makes all of our colleges and universities better; it encourages innovation, creativity and excellence.

The American economy, American health care and the American people all benefit from the inventions, research and contributions of those who come to study in the US.

So does American influence and soft power: Our phenomenal system of higher education is respected the world over, and international students who come to the US may in turn be ambassadors for the best of American values and aspirations, including free speech, equality, freedom of religion, diversity of experience and thought and at least a striving toward meritocracy.

Previous presidents, even those with conservative views on immigration, have at least recognized that there is something important and strategic in educating the world's future leaders, influential thinkers, creators, great artists and innovators.

And many of the rest of us understand that our universities, like our country as a whole, are stronger, better and more effective not just when they attract the world's best and brightest, but when they bring together a diverse group of curious, ambitious young people who learn not just from their instructors, but from each other.

Unlike other Trump administration changes to immigration rules, there isn't even a pretext of a benefit here. This President and his lackeys at least claimed that previous policies were about protecting American jobs, defending national security or keeping Americans safe from crime.

Those assertions were specious, cynical and easily debunked, but there was at the very least an attempt to say this was about putting America and Americans first. Here, they've done away with even that sham.

This rule does not have to stay in place; it is so far more of a news release on guidance than a formal rule. DHS is expected to publish the formal rule soon, which means there is still time for the public to push back on it.

Colleges and universities, too -- many of which are already responding to this potential purge with confusion and alarm -- should take this time to figure out a way to keep their international students in the country while keeping the whole campus community safe.

It's appalling that in the middle of a deadly pandemic, any resources at all are going to the creation and, eventually, enforcement of pointless and unnecessary immigration rules that don't make a single person safer, but compromise the educations of thousands of students, and risk the health of thousands more people around the world to boot.

There is no excuse; there is not even the whiff of a reason. Except: This President, and his administration, are reckless bigots who will hurt American interests if it means they can also hurt immigrants.

I-5 reopens near Albany after large wreck