This is the best way to honor John Lewis' legacy 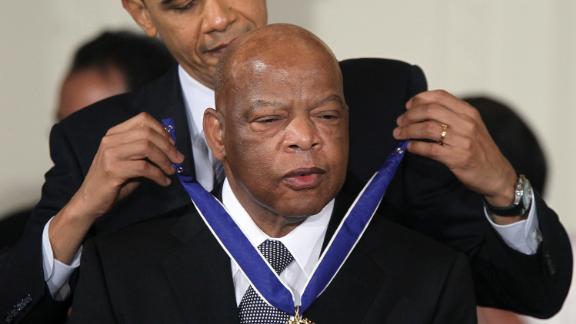 There is a bridge in Selma, Alabama, where the 25-year-old John Lewis nearly died during the 1965 "Bloody Sunday" march. This bridge, named after Edmund Pettus -- a Confederate general and leader of the Alabama Ku Klux Klan -- spans the reality of America's racist foundations and the dream of a just country.

The bridge should have been renamed long ago. Pettus was a domestic terrorist who fought in a traitor army for the right to claim ownership of human beings. Children aren't brought to Edmund Pettus Bridge to learn about him; families now make the pilgrimage to teach the next generation that men like him can and did lose. That while these men wielded hideous and violent power, there were very brave people who linked arms and faced that violence together in their demand for justice. That heroes like Lewis put on his best $5 suit, along with his trench coat and backpack and fought for Black voting rights.

Things should be called what they are, and the bridge in Selma should be renamed after Lewis. This is the bridge where Lewis once thought he was going to die, having been beaten so badly by White police officers he suffered a broken skull. This is the bridge he crossed repeatedly over the years, eventually arm in arm with the first Black president.

There is a necessary skepticism about the superficial changes being made in this moment. But to honor the legacy of Lewis' life and go beyond symbolic change, we must restore the Voting Rights Act.

Lewis was an activist and a Democratic congressman. He was a role model for those who preach direct action in the streets and those who believe that change comes from within the halls of power. He worked in both spaces, towards the same end: the right for Black Americans to vote.

Lewis, along with so many others on that bridge in 1965, was monumental to the passage of the Voting Rights Act that year. The law, however, was gutted in 2013 by the Supreme Court, and Lewis fought to restore it in Congress. On December 6, 2019, Lewis banged a gavel on the House floor and heralded the approval of the Voting Rights Advancement Act to restore the protections of the landmark 1965 legislation.

But that bill is still sitting on Republican Senate Majority Leader Mitch McConnell's desk, where it is likely to remain, along with the promises of the 15th and 19th amendments to the US Constitution, as long as he is in office.

If there's one obvious way to honor Lewis' legacy, it's this: doing everything we can to ensure the right to vote for every American. So we will continue to protest, vote and fight like hell against White supremacy in our neighborhoods and in our government. We demand the Senate passage of the Voting Rights Advancement Act, and we demand new leadership in Washington.

A couple weeks ago, I was lucky enough to speak to Dawn Porter, director of "Good Trouble," the new documentary on Lewis' life. Protests in the wake of George Floyd's death had sprung up across the country and Lewis had recently appeared, masked and defiant, in a series of photos that showed him gazing at the Black Lives Matter mural painted on the street outside the White House. I'm White and relatively young, so I'm aware that it's not my place to say what this moment is and how it fits into history, but I asked Porter if she had any insight into how Lewis was feeling these days and whether he thought this could be the beginning of a new foundational shift in action and understanding. Porter said he believed it was.

Renaming the bridge in Selma is one item on a list of long-overdue corrections that need to be made, but it won't stop the disenfranchisement of Black Americans. It is the fight for voting rights that will help continue Lewis' life work. He began inspiring us more than five decades ago, and his legacy isn't just the bridge -- it's the march towards justice.

One person taken to the hospital after assault