The foreign threats to the US election 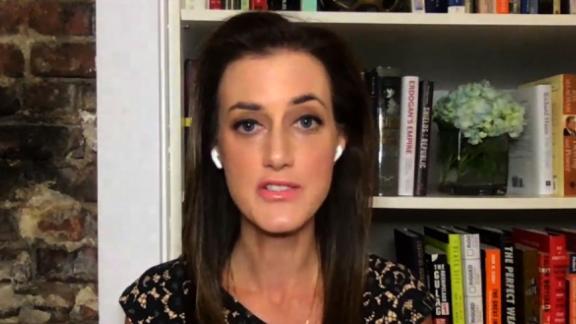 Foreign actors still view US politics as a playpen. That's the key takeaway from the updated assessment of the election threat landscape by the US intelligence community's top election security official. It included detailed information on the "the intentions and activities" of China, Russia and Iran with respect to the 2020 election, now less than three months away.

Four years into Donald Trump's administration, foreign adversaries are still trying to attack our elections; they have not been dissuaded or deterred from attempting to advance their agendas at the expense of our democracy.

This is unsurprising, given that the President seems to welcome foreign election interference that benefits him. Trump not only failed to condemn Russian President Vladimir Putin's attacks on democracy -- he has helped them by doing things like denying Russian interference in the 2016 election, spreading disinformation and divisions, undermining our institutions and, a whole number of other things that seem to belong in Putin's playbook for how to degrade US democracy.

Having worked on the public release of intelligence assessments, I know that this information is briefed to key officials like the President before it is declassified. Trump must have had intelligence briefings about Russia's ongoing preference for him and the ways it is conducting its influence operations. Despite this, he continues to spread disinformation and attack the foundations of our democracy despite the fact that he has to know how harmful this is to America and how helpful it is to Putin.

This latest intelligence assessment builds on previous statements that have, to varying degrees, flagged the threat from these three countries. What's new in this latest statement is an assessment of specific foreign actors that are supporting or seeking to denigrate. China, according to the latest assessment, "prefers that President Trump -- whom Beijing sees as unpredictable -- does not win election." Russia, on the other hand, "is using a range of measures to primarily denigrate former Vice President Biden and what it sees as an anti-Russia 'establishment.'"

The statement, however, seems to draw a false equivalency between these two interference efforts. There's a difference between a preference and an active, multi-pronged campaign. While China has been "expanding its influence efforts ahead of November 2020," this is primarily taking the form of public rhetoric, according to the statement. It notes that the Chinese Communist Party has "harshly criticized the Administration's statements and actions on Hong Kong, TikTok, the legal status of the South China Sea, and China's efforts to dominate the 5G market."

While Beijing recognizes these efforts might affect the election, it "will continue to weigh the risks and benefits of aggressive action," the statement says. This is a far cry from Russia's active and covert influence operations online. This is comparing apples and oranges to a certain degree.

Putting China's rhetoric ahead of -- or even on the same level -- as Russia's ongoing disinformation campaigns is irresponsible. Russia, according to the statement, is "using a range of measures" to attack Biden and support Trump. This includes Andriy Derkach, a pro-Russian Ukrainian official, who's spreading claims about corruption to undermine Biden's candidacy. Derkach has told the Washington Post that he has sent documents to a Senate committee still investigating whether Hunter Biden's involvement in a Ukrainian gas company posed a conflict of interest when Joe Biden was vice president.

By engaging with Derkach, Republicans leading the investigation could be pushing foreign disinformation flagged by the intelligence community in this latest assessment. It's also worth noting that the CIA had reportedly refused to participate in the Senate investigation. Sen. Ron Johnson, who heads the Senate committee "investigating" Biden, denies that the committee is using "disinformation" supplied by pro-Russian Ukrainians and says it's "a flat-out lie" that the CIA was asked to brief the committee.

Russia, according to this and previous statements, appears to be the biggest threat when it comes to active attacks on our elections, and they ostensibly have the most experience. While all countries should be called out for election interference -- including Russia, China, and Iran -- we need to have our priorities straight when it comes to helping Americans identify the relative scale and scope of these threats.

A responsible President would call out all of these actors for attacking our democracy, regardless of whom they prefer. A responsible President would then emphasize punitive measures for these attacks as part of a strategy to deter more of them. In the hands of Trump, however, it's possible that this assessment will become part of the very disinformation attack it describes if it's misrepresented to spread divisions or inaccurately describe a candidate's track record.

We know that Trump has been ramping up tensions with China and it's likely he will use the intel to play politics and twist the IC's assessment to appear tough on China.

Trump is a creature of habit, and his history of accusing China of attacking our elections -- and not Russia -- means he may be willing to aid and abet at least one country's influence operations. Trump has also denied previous intelligence assessments indicating that Russia preferred him as a candidate in 2016 and reportedly grew angry earlier this year when a senior intelligence official told Congress that Russia still wanted him to remain in office.

If the past is prologue, Trump is likely to turn a blind eye to some interference, cherry-pick information and misrepresent warnings from our intelligence community as long as it benefits his campaign prospects. The very intelligence aimed at safeguarding US elections could become so politicized that it runs the risk of helping foreign influence operations.