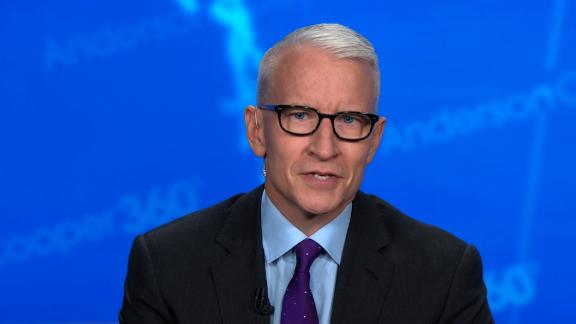 CNN's Anderson Cooper shows footage from "Anderson Cooper 360" from April 2011 showing Donald Trump promoting a conspiracy theory that then President Barrack Obama was not born in the US, just as he's doing now with vice presidential nominee Sen. Kamala Harris.

As news of Kamala Harris' selection to be the Democratic vice president broke, Democrats were warning that racist and sexist attacks on Harris would be coming. As a Republican who saw how Democrats often stayed silent when Sarah Palin was caricatured as a "Caribou Barbie" doll, and sees how Democrats seem to call every Republican policy or criticism some kind of microaggression or outright racism, I was prepared to roll my eyes.

Except, they were not wrong.

First came the Newsweek opinion piece "Some Questions for Kamala Harris About Eligibility," which made its way through the pro-Trump echo chamber, including a Trump campaign aide, up to -- inevitably -- the President himself. At Thursday's news conference, the President gave another variation on his "many people are saying" theme. "But that's a very serious... you're saying that, they're saying that she doesn't qualify because she wasn't born in this country," the President incorrectly said.

I did not expect that the Oakland-born Harris would be subject to a reprise of the "birther" attacks used to falsely question Barack Obama's legitimacy. But having had a front row seat to watch what my party has devolved into over the past decade, maybe I should not have been surprised.

At a prominent meeting of Republican officials in the South in 2011, a Barack Obama impersonator was hired -- to tell "black" jokes and walk out to the crowd playing Bruce Springsteen's "Born in the U.S.A." The audience loved it. Mark Meadows, who is now the White House chief of staff, was heard on video saying we should "send Obama back to Kenya" in 2012.

And in the basement of the Capitol, at the House Republican Conference, I watched as one Republican member, Louie Gohmert, joked at an "open mic" to his colleagues, "Kenya hear me?"

Yes, there were groans -- there usually are when Gohmert addresses his colleagues -- but not universally. And while serving as the communications director for the Republican National Committee and its first African American chairman, I had to deal with an otherwise well-meaning staffer who posted a sarcastic joke on Twitter -- a place where sarcasm does not work -- about our President being Muslim in 2010.

Instead of pushing back on the story, I decided at least one Republican needed to come clean on this nonsense, so I made the following statement: "The RNC has never spoken about the President's Christianity because it is both crystal clear and a non-issue," the statement read. I still remember typing that statement out, typing the word "religion," then replacing it with "Christianity" to make the point finer.

The statement brought me a lot of praise from colleagues of both parties and from journalists. Sam Stein, then at HuffPost, called it "perhaps the fullest distancing yet of any Republican entity from the Obama-is-a-Muslim rumors."

But did it put a dent in any of this? Sadly, no. And the worst was yet to come.

All of those anecdotes have a common thread. For a Panamanian-born John McCain, the son of a Mexican-born father Mitt Romney and the Canadian-born Ted Cruz -- no problem. But for the first Black President, and now for the first Black nominee for vice president, the signal is clear: they're not "one of us." They don't belong here. It's been a time-tested refrain, one my first political boss, Jesse Helms, used successfully. But those days should be long gone.

Perhaps Trump and his supporters would have ended up here eventually. The political landscape is vastly different today than where it was pre-Covid-19 -- when a strong economy had Democrats scared that four more years for Trump might have been a foregone conclusion. But with more than 167,000 Americans dead from Covid-19, 10% unemployment, 70% of the country believing America is on the wrong track and more than half of voters disapproving of the President's handling of the pandemic, the campaign playbook had to be re-written. So, we're back to Trump's "greatest hits," as it were.

Meanwhile, like animals scurrying before an earthquake, Republicans are making plans for a post-Trump party. That's smart, but the party may still be defined by Trump and many may view all Republicans as eager to pick at every scab that divides us as a country and the Trump era as a stain on the party's soul. Minority voters may be lost to Republican voters for yet another generation -- something that as states like Texas potentially become battlegrounds, Republicans up and down the ballot can ill afford.

Republicans, stick to that, and stay far away from the "birther," 9/11 truther and other conspiracy nonsense -- except to condemn it. It hasn't helped the party in recent years -- and it won't now.