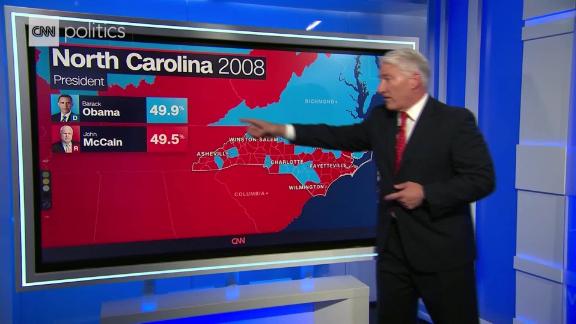 Barack Obama turned this historically red state blue in 2008. Joe Biden is hoping to do the same in 2020. CNN's John King takes a look at the voters he'll need.

On a Wednesday morning in November 2016, I sat alone in my office after the most disappointing election night of my career wondering if anyone else felt an intense need to get to work. I did not have to wonder long.

In the weeks that followed, candidates across North Carolina -- women I had worked with in my former role as a consultant and development manager of an organization that helps women run, win and lead in elected office -- pledged to continue fighting, run again and win. Staffers, many of whom had never worked on a campaign, cried in disbelief and exhaustion while asking for ways to sharpen their skills. Donors shared future strategies created in the dead of night.

As the nation draws closer to the 2020 election, the conversations that I'm having now remind me of the surge of energy and purpose that I witnessed in 2016. North Carolina voters, particularly Democrats, are motivated by the change that they've created and by the work that still needs to be done.

Ordinary citizens have seen how much their organizing and their candidacies matter and have been writing themselves into the process to address the needs of our communities: quality and well-funded public schools, expansion of Medicaid -- long overdue in our state -- to cover roughly 500,000 currently uninsured people, and a reckoning with the racism that has permeated our gerrymandered districts and the fabric of our everyday lives. This last issue energized a long-brewing, but seemingly overnight national shift that brought America's sins and unhealed wounds into the inescapable light.

Ashton Clemmons, a former teacher and school administrator, who is now a Democratic representative in the state General Assembly, was one of the first people I talked to in the days that followed that 2016 election. She quickly got busy mobilizing her community around the inequities she saw in the public school system and among the children she adored. These inequities included a lack of resources for teachers and students and a targeted effort that many say would effectively resegregate schools based on race and income, primarily through actions proposed by the state's Joint Legislative Study Committee on the Division of Local School Administrative Unit.

"I didn't know it in the moment, but I think for me it was saying I am not going to stand on the sidelines. I am going to literally do everything I can with every moment of my life to not make this who we really are as a community," Clemmons told me recently. "My first thought was 'there's no way I can do this right now.' But as someone who believes strongly in our public schools and has watched, in my opinion, a well-planned assault on our public schools, I got to a point where I thought there was no way I could not try this."

Public education has been further weakened by gerrymandering in our state. This is especially true in Nash County, where the creation of the Innovative School District by the General Assembly, a concept modeled similarly to other district takeover models by for-profit charter school operators that show little evidence of improved performance of failing schools, threatened to take power away from the local school board in deciding what is best for schools in its district. After witnessing this, James Gailliard, pastor of Word Tabernacle in Rocky Mount, began gathering signatures to literally write himself into the political process by running for the General Assembly in 2016. He told me that he wanted to "make a dent in that system."

Gerrymandering -- in which the party in power controls the drawing of electoral districts, tailoring them to its advantage -- has long been an issue in this state. In 2018, Republicans held the majority of North Carolina's congressional and legislative seats, despite winning less than half of the vote. Recent wins in state court could yield two or more Democratic congressional seats next month, which would increase the party's holdings to at least five of 13 districts.

"I recall communities where my members lived on the same street, and their front porches faced each other. They could stand on their porches and look at each other, but they were not in the same House district," said Gailliard, a Democrat, citing the surgical precision used to ensure Republican control of the legislature. "Basically, they drew in every Black precinct in Rocky Mount and stuck in House District 7, along with every Black precinct in Franklin County. They left the rest of the population in District 25."

Gailliard lost, but ran again in 2018 after the district lines were redrawn and is now a first-term representative in the General Assembly.

As a pastor and a politician, Gailliard told me it is important to speak to the issues of the people he leads and represents in order to "wrestle back the language of faith that's been stolen by the conservative right," while understanding the hurdles he faces as a biracial man in eastern North Carolina.

In Wilson, where I was raised and now live, we're witnessing our own renaissance while working through the ugliness of our past and present sins. Last year, we elected our first Black mayor, Carlton Stevens. Stevens, an entrepreneur and former educator, said he decided to run to ensure that the most vulnerable residents of our city did not fall behind as other communities moved forward.

"I wanted to be a voice for everyone. Everyone should be able to chime in, but if you don't know who to go to or feel comfortable contacting someone who is supposed to have your best interest at heart, then you'll sit back and let things happen because you don't feel like you have a voice," Stevens, a Democrat, told me.

Stevens, who was 44 when he ran as a first-time candidate, said the decision to not wait his turn against a 28-year incumbent met with resistance from established politicians and pillars of the community.

"There were times when I got very discouraged," Stevens said. "I didn't have any rhetoric that I could just spit out like a seasoned politician. So when I was asked questions, I could give nothing more than my heart. That's what I did, and it worked."

Wilson has been tested this year. The Covid-19 pandemic has further exposed the vulnerability of many of our residents who do not have access to adequate health care, survive in substandard living conditions and now navigate joblessness without a full, just federal stimulus relief package. Many already were not making ends meet before the crisis. According to the US Census, the median household income in Wilson is under $43,000, and poverty is 21%.

And in the midst of the same racial unrest experienced throughout the rest of the country, our collective hearts were broken over the senseless killing of 5-year-old Cannon Hinnant, who was White. Though the suspect, a Black man, was apprehended, charged with first degree murder and is in jail awaiting trial, many people in Wilson and throughout the country politicized this tragedy to counter the legitimacy of those protesting generations of institutionalized and overt racism in our nation, and certainly in our town.

However, hope is on the horizon here. The increased engagement I have witnessed this year from Wilson to Washington, DC, has helped me put that November morning four years ago into perspective. Perhaps we have to be broken in order to build stronger, firmer foundations. I believe we have done that in North Carolina. We are ready to put policies in place that will equitably insure and educate our citizens and address our racial bias. We are ready to move forward.