How Trump could undermine Fauci and remake the US government 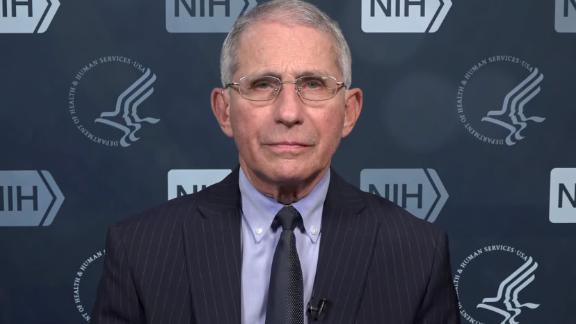 CNN's Erin Burnett asked Dr. Anthony Fauci if President Donald Trump was trying to get him to quit by attempting to disparage him, calling him a Democrat to supporters.

While many Americans were looking ahead to the final presidential debate earlier this week, President Donald Trump was signing an executive order the likes of which has never been seen in a democracy. It is an edict expected under a dictatorship, a banana republic or a military regime. And it appears to stifle the President's opponents within the government, posing a particular danger should it affect policymakers who are working tirelessly to fight the Covid-19 epidemic.

Under the order, which undermines the Pendleton Civil Service Reform Act — a law that came into effect in 1883 to ensure government employees were hired based on merit and protected from political retribution — an estimated 100,000 or more will see their jobs reclassified from "competitive service" to "excepted service."

Under this bureaucratic sleight of hand, a reclassified federal employee engaged, for example, in setting policies for social distancing on public transit systems during the pandemic would have fewer protections from disagreements with the White House. By removing the word "competitive" and replacing it with "excepted," the order eliminates the employee's ability to appeal a dismissal and lumps him or her among political appointees — essentially serving at the pleasure of the President.

While the White House claims the "Executive Order on Creating Schedule F in the Excepted Service" would allow government to "operate more efficiently," it would also give a second-term Trump leeway to fire civil servants for being disloyal and fill government positions with his cronies, while giving him more sway on policies ranging from vaccine safety to flight inspection standards.

As Max Stier, president and chief executive of the non-profit, nonpartisan organization Partnership for Public Service, told Stars and Stripes, "The order is highly troubling. It appears to be an effort to remove the career merit protections around a core part of the civil service."

Stier told CNN that the executive order "not only blurs the line between politics and the neutral competency of the career civil service, it obliterates it."

Under the executive order, agency heads have 90 days to review which positions should be reclassified, with the deadline falling on January 19 — the day before the presidential inauguration (final determinations would be due in 210 days).

Depending on how quickly the administration implements the order, a defeated Donald Trump could potentially eliminate the jobs of thousands of American government workers as he exits the Oval Office and replace them with Republican loyalists who could then hold on to positions in government and resist Joe Biden. Even if Biden rescinds the order as the incoming president, trying to reverse Trump's actions will inevitably prove to be a headache.

Legal experts tell me that any way this order plays out in coming weeks, the federal courts are likely to be engaged, where nearly a quarter of federal judges owe their appointments to Donald Trump.

And should Trump win reelection? Make no mistake, the executive order offers the final grounds for a massive remodeling of the United States government by taking aim at what the President views as meddlesome, anti-business administrators and regulators.

The executive order, which applies to career officials involved in "confidential, policy-determining, policy-making, or policy-advocating" work, ultimately sends an alarming message to the 9 million workers who make up the federal government, most of whom are based outside of Washington, DC.

Rep. Don Beyer, a Democrat from Virginia, attacked the executive order as "an attempt to redefine the civil service as a political arm of the presidency rather than public servants who work for the American people.

"The stated goal in the text of the order itself weakening union protections and making it easier to fire senior federal employees is to make the federal workforce more loyal to the President. Such open cronyism does not benefit the country, it benefits the President," Beyer said in a statement issued on his website. "It is particularly noteworthy that President Trump introduced this measure as he publicly feuds with medical and scientific experts like Dr. Anthony Fauci. Trump seeks to blame others for his incompetent failures on the pandemic at every turn, and this order shows the lengths to which those around him are willing to go to appease his Nixonian sense of paranoia."

Indeed, the executive order explicitly mentions removing federal employees. It states, "Separating employees who cannot or will not meet required performance standards is important, and it is particularly important with regard to employees in confidential, policy-determining, policy-making, or policy-advocating positions."

Many protected federal employees have provoked the ire of the President, perhaps none more than Fauci, who serves as the director of the National Institute of Allergy and Infectious Diseases and is a member of the White House coronavirus task force. In April, Trump retweeted a post that said it was "Time to #FireFauci," only to say later that day, "Today I walk in, I hear I'm going to fire him. I'm not firing him. I think he is a wonderful guy."

After repeated, public disagreements with Fauci over everything from the use of hydroxychloroquine and bleach to treat Covid-19 to school closures and the vaccine approval timeline, a senior administration official acknowledged in July that it would be difficult to remove him due to federal employee protections. Trump, who has continued to rail against Fauci, admitted as much during a phone call with campaign staff last week, according to NBC News. Trump labeled him a "disaster," and said, "Every time he goes on television, there's always a bomb, but there's a bigger bomb if you fire him."

A new report from the Earth Institute's National Center for Disaster Preparedness at Columbia University estimates that 130,000 to 210,000 Covid-19 deaths could have been avoided if the Trump administration had quickly implemented a response.

Instead, nearly 8.5 million have been infected in the US, more than 224,000 people have died and nearly every state is currently in the thralls of a massive surge of Covid-19 cases and hospitalizations, with the death toll expected to follow. The President has never needed Fauci's sage insights more, yet Trump is allergic to the often-inconvenient truths he provides.

The new executive order creates pressure for every single federal employee — from a soldier under fire from Taliban forces in Afghanistan to a postal worker delivering absentee ballots — to march to the tune of a President who increasingly acts like a strongman.

His greatest disgrace is the complete failure to confront Covid-19 — a catastrophe he constantly seeks to blame on others. But rather than focusing on saving American lives, it seems Trump is more preoccupied with trying to purge the entire United States government of disloyal individuals.

President Trump has now openly and irrefutably chosen a path of governance that is driven by political partisanship. It seems Trump cannot be swayed by reasoning and will not countenance challenges that he believes stem from disloyalty. He seems unable to imagine that expertise can exist to serve humanity, or that government policymakers toiling inside the federal bureaucracy might wisely and legitimately, based on scientific principles and facts, reach conclusions that run contrary to the President's personal political interests.

The bottom line, then, is that Donald Trump seeks experts in government who will consistently bend to his will, even despite the scourge of Covid-19, against which we currently have no defense other than changing the human behaviors that facilitate the virus' spread.