The perfect metaphor for Trump's treatment of his loyal supporters 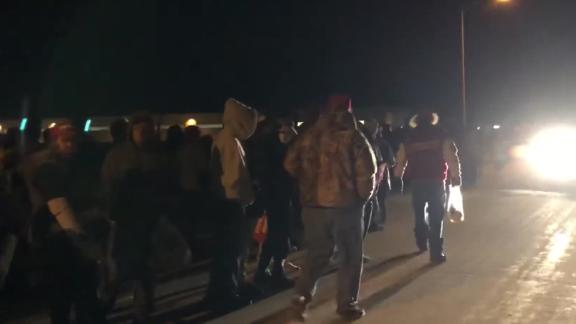 Hundreds of people who attended President Donald Trump's rally in Omaha, Nebraska, were stranded in the cold waiting for buses for several hours after the rally. CNN's John Harwood reports.

There are conflicting reports on how it happened, but no one disputes that it did: hundreds of President Trump's supporters were stranded in near-freezing weather after a rally on Tuesday night in Omaha. The President flew away on Air Force One, leaving his MAGA troops out in the cold. An Omaha Police Department spokesman said 30 people received medical attention and seven people were taken to the hospital.

Twitter users instantly jumped all over the metaphor -- Trump leaves supporters in the cold -- but let's take a minute to understand who was responsible.

Presidential candidates have advance teams that are in charge of setting up campaign events and making sure they run smoothly. This means finding the right places, stage-managing what happens, wrangling local officials and -- most relevant here -- getting people in and out quickly, efficiently and safely.

In Omaha, for logistical reasons, Trump's team had people park nearly three miles away and hired dozens of buses that ferried in a crowd of 25,000, police said, over 10 hours. But when the rally ended, "there were no campaign advance teams in sight," according to CNN reporting. "One local advance volunteer said they were given no instructions how to get supporters back onto the buses. 'We need at least 30 more buses,' an Omaha police officer said."

Rather than wait, many began walking back, clogging the road and slowing the buses further.

Whatever the reason for the delays, it was the advance team's job to make sure something like this didn't happen.

You might say the President isn't responsible for the buses at his rallies. And in one sense that's true. But in another it's not. The first thing young advance people are taught is they are always representing the candidate. They are ambassadors to local officials, police and fire departments and all the assorted vendors who help pull off a rally.

Back to the metaphor. Advance people take their cues from up above. If Trump's people had thought their candidate would be furious at his supporters being left in the cold, they would never have let that happen.

President Trump has long shown little regard for the people who come to his rallies. Exhibit A is allowing thousands of maskless people to congregate for several hours, shoulder to shoulder, despite a surging pandemic and his own health officials' recommendations against it. ("All they talk about is covid, covid, covid, covid, covid...and we've made such progress," he groused to the Omaha crowd.)

This delivers a lesson to advance people -- rallygoers are just props for the campaign, there is no need to take care of them.

Hogan Gidley, the chief spokesman for the campaign, showed how easily this callous MO trips off the tongue when he was asked by CNN's Alisyn Camerota on Wednesday morning whether Vice President Mike Pence was concerned about campaigning in the Covid hotspot of Wisconsin. Gidley appeared to assume the question was about the vice president's well-being, and answered "The vice president has the best doctors in the world around him."

The meaning of the question for anyone outside the Trump orbit would be obvious -- what about the health of supporters, who were being potentially exposed to a dangerous contagion at a mass assembly?

The fact is, throughout his stump speeches, the President gleefully doles out his trademark insults and disrespect, his lies and misdirection. It is hard to imagine that an advance person is going to think that indifference to the fate of local people at an event would get the boss upset.

I can tell you, the five presidential candidate I've worked for would have fired whoever was responsible for last night and apologized publicly to the city of Omaha. Don't hold your breath for Trump to do anything like that

And that's the final lesson he teaches his young staffers. You are not responsible for your own actions and you need never apologize.

Some will argue it's a stretch to lay this at the President's feet. He's not in charge of transportation, which is true. But he is in charge of setting the tone for his campaign.

Hundreds of Trump's loyal supporters were left out in the cold in Omaha on Tuesday night. A metaphor for this presidency, this campaign and this person, Donald Trump.

Prince Philip, the husband of Queen Elizabeth II, has died

Of more than 700,000 fully vaccinated Oregonians, 168 tested positive for COVID and 3 died