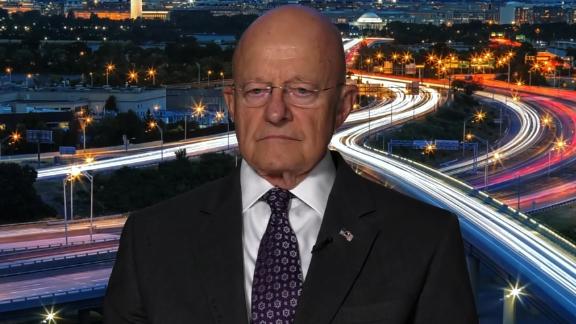 Former US Director of National Intelligence James Clapper tells CNN's Don Lemon that it is is "very disturbing" that President Trump is replacing top officials in the Department of Defense with "political commissars."

With two months until the inauguration of President-elect Joe Biden, Donald Trump is playing politics with the military -- and putting the country's security at risk.

By firing some of the top leaders at the Department of Defense and replacing them with partisan loyalists, President Trump has created severe turbulence inside an institution that should be focused on preparing for a new commander-in-chief and protecting Americans against possible threats in the presidential transition period.

Instead, the department is now consumed by personnel drama and fear over what the outgoing president might order the military to do in his final days.

In 2019, when I was chief of staff at the Department of Homeland Security, Trump unexpectedly forced out the secretary, deputy secretary, and other senior leaders for refusing reckless, and sometimes illegal, White House demands.

It took months for the DHS to recover from the chaos, and America was less safe as a consequence.

Why? Because "leadership decapitation" has three highly disruptive effects, which the Defense Department is now experiencing.

First, it creates distraction, as "acting" officials must learn new jobs on the fly, taking time away from pressing national security matters, such as planning for the incoming administration or reviewing sensitive US troop deployments overseas.

Second, it fosters discord, as the sudden changes lead to bureaucratic infighting. This might be manageable when one top DOD job changes hands, but when multiple experienced leaders are nixed in favor of less-qualified political appointees, it throws the civilian leadership of the military into disarray.

Third, it leads to indecision, as mid-level managers become paralyzed with uncertainty. Former colleagues in the Pentagon are already telling me they're unsure what the marching orders are from their temporary bosses. The result is that some important defense activities -- from cybersecurity to counterterrorism -- could grind to a halt until the new guard has a chance to review them, giving bad guys in dark corners of the globe a reprieve.

This couldn't come at a worse time.

In the national security community, we've long worried about our adversaries taking advantage of the US in times of presidential transition.

Whether it's seizing another country's territory, conducting a surprise digital attack on a US ally, or targeting Americans overseas, foreign powers might view America as less likely to mount a tough response amidst the complicated hand-off between two administrations.

In my view, the President's Defense Department firings increase these odds.

The question on many minds is, "Why is Trump doing this now?" In mere weeks, he'll no longer be commander-in-chief. So, what gives?

Some fear he's aiming to pull US forces out of strategic locations around the world or to selectively cherry-pick and declassify information about Russia to rebut the "collusion" narrative, potentially burning sensitive intelligence sources in the process.

Meanwhile, Americans on social media have voiced darker worries and conspiracy theories -- that he's preparing to deploy US troops in states where he's challenging the vote or to protect himself from having to leave office.

Don't put anything past Trump. But most of the "worst case" scenarios are either highly implausible or would be hard to play out in 60 days.

Keep in mind, to get anything done, the President's loyalists need the acquiescence of the Pentagon's many thousands of career civil servants and uniformed personnel, who carry out policy every day. These men and women do not easily say "yes" to foolish or illegal demands.

I expect the interim regime atop the Defense Department to issue a flurry of policy directives, in part to show what Trump would have done in a second term and perhaps to convince his base that they should re-nominate him to shake up the so-called "Deep State."

Few of the changes will stick, and most will be reversible by a Biden administration, although the dysfunction is likely to create headaches for the incoming team -- which may also be what the White House is trying to do.

More than anything, though, the President is likely exacting revenge against appointees who didn't bend to his will. Firing them is Trump's last act of retribution, an unsurprising move for a man who bragged to us about his own vindictiveness. (He once told a group of us in the Oval Office in 2019 that, right or wrong, he'd learned to sue people who crossed him, rather than simply make threats, because a lawsuit would force them to their knees and they'd settle.)

Americans should be less worried who Trump has sent to the Pentagon, and more worried about how his impulsive and retaliatory actions affect our service members, making it harder for them to do their jobs to protect us.

Voters should also be concerned that, virtually, all elected Republicans are not crying "foul" and condemning the President for playing personnel roulette with our military.

Trump's purges are bad for government stability and even worse for US security.

For those of us who served in his administration, the episode is another sobering reminder of why he's unfit for office -- and validation of why he didn't deserve a second chance.