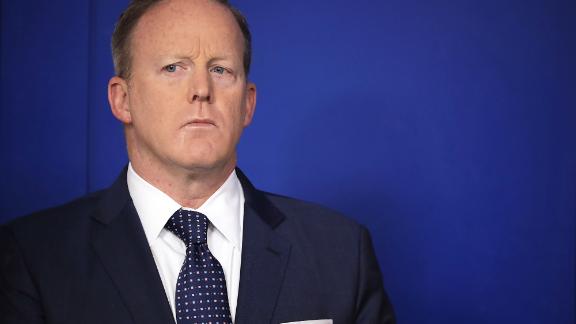 Former White House press secretary Sean Spicer responds to "Have you ever lied to the American people?" CNN's Jeanne Moos reports on his not-quite-an-apology tour.

It started on a brisk Saturday in January 2017 with an angry press secretary, Sean Spicer, looking straight into the camera and lying to the American people on behalf of Donald Trump.

The lie was about the size of the inaugural crowd. It was easily disproven and had no real purpose. It was not to protect national security or for any other justifiable reason. Spicer stood at a White House lectern and lied simply to feed the new President's ego and ease his limitless insecurity. Over time we learned just how significant and prophetic that first big lie was.

Fast forward to this week, when Spicer's successor Kayleigh McEnany, on Fox News, deflected a question about the Trump administration sharing intelligence with the Biden transition team. McEnany said that was really a question for the White House, but she couldn't answer it right now because at that moment, on the air, she was appearing as a member of the Trump campaign. Now it should go without saying you can't be a White House staffer and a campaign adviser at the same time, but in the Trump Administration, that's where we are.

It would be funny if it weren't so destructive. This White House's antics keep reminding people of the satirical HBO series "Veep." But they are not a joke. The administration's chronic lying has divided Americans, degraded their trust in government, and, worst of all, turned facts and evidence into slippery instruments of partisan politics.

As Trump said in a speech to the VFW in July: "Don't believe the crap you see from these people, the fake news." He added, "What you're seeing and what you're reading is not what's happening."

And if you are part of the Make America Great Again crowd, you only believe what Trump says.

So, tens of millions of Americans have trusted Trump and refused to put on a mask to protect themselves and everyone around them from a highly contagious disease that has killed more than 245,000 in the US. Trump sidelines actual infectious disease experts and instead makes a neuroradiologist, Scott Atlas, the face of the administration's coronavirus efforts.

Trump tells us to believe that tear gas wasn't used on peaceful protesters outside the White House to clear the way for a Presidential photo-op -- and half of America goes along with the lie, despite visual evidence shown on our screens over and over again.

That same half of America agreed with him that Russian interference in the 2016 election was a political hoax and the President himself was the victim. Both Special Counsel Robert Mueller and a bipartisan report from the Senate Intelligence Committee said the opposite. And let's not forget the "perfect call" where the President attempted to pressure the Ukrainian President into manufacturing dirt on the President's political opponents. (Trump denies that was his goal.)

The dishonesty from this President and his press secretaries -- all four of them -- has us where we are today.

Truth now comes in two varieties: Republican and Democratic. This is shaking the foundation of our democracy.

Now, some will say, politicians and their spokespeople always lie. For some that is true. But there is a long tradition of telling the truth from the White House podium. For some 90 years press secretaries have done their best to promote the agenda of their president, but have also clung steadfastly to telling the truth. Why? To retain their credibility and keep the country informed. Those who strayed from that practice, Richard Nixon's press secretary Ron Ziegler, for example, were punished not only by the reporters who covered him and openly doubted his word, but also by history.

My own experience just 20 years ago is telling. When President Clinton was impeached for obstruction of justice and perjury, over his affair with a White House intern, I was forced to concede major elements of the story as true -- objective truth -- despite the damage it did to the President. If this happened today, Trump's representatives would say the DNA test was rigged and the internet would be flooded with headlines: "It was some other dude's DNA."

Of all the challenges facing President-elect Joe Biden, restoring objective truth and common facts will be among the most daunting and important. But it can be done.

My advice for the incoming White House press secretary is to find a mistake or misjudgment the new President or his team has made and embrace it, highlight it with the media and the public. Credibility comes from being honest about the things you screw up. Taking responsibility, something Donald Trump told us out loud he never does, is the key to winning trust and restoring a common set of facts.

It's easy to say to the new press secretary: Promise you will never lie. The fact is the last four press secretaries have promised the truth and delivered everything but. The ability to be a trusted messenger for the President needs to be earned. And it's earned by telling the truth even when it's difficult and damaging to your team's interests.

It took Donald Trump less than four years to destroy the credibility of the Oval Office. He leaves us in a place where we don't trust the evidence right in front of our nose. He did this deliberately and my guess is he's quite proud of his work.

That same deliberate effort, this time to be everything Donald Trump and his minions were not, is the only way we can to return to the late Sen. Daniel Patrick Moynihan's world of reality, where "everyone is entitled to his own opinion, but not to his own facts."