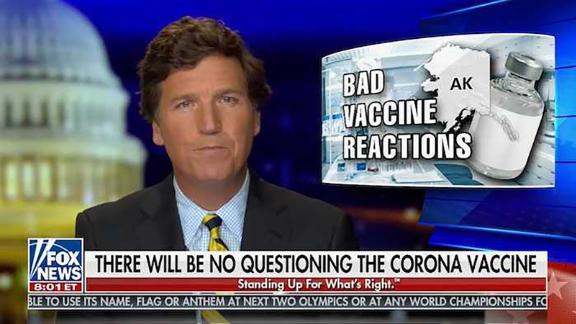 The First Amendment offers wide protection for free speech in America. But that right to express an opinion is not unlimited. Everyone knows you can't run into a crowded theater and yell fire. There are also long-established limits on what you can lawfully say and write about individuals and organizations.

During a deadly pandemic, spreading disinformation about the novel coronavirus is the equivalent of yelling fire in that crowded theater. The result is the same: it puts people's lives at risk. Yet, over the last nine months, Fox News has done everything in its power to discourage the behavior needed to mitigate the risk of contracting the virus. And now, as cases in the US exceed 17 million, Fox News -- with Tucker Carlson being one of the chief carnival barkers on this one -- is fanning the flames of skepticism around the Covid-19 vaccine.

Carlson openly encouraged people to be suspicious of what he described as the "glitzy" vaccine rollout on Thursday and went on to say, "So, how are the rest of us supposed to respond to a marketing campaign like this? Well, nervously. Even if you're strongly supportive of vaccines, and we are, even if you recognize how many millions of lives have been saved over the past 50 years by vaccines, and we do, it all seems a bit much. It feels false, because it is. It's too slick."

The miracle of developing vaccines on such a short timetable will not lead to any miraculous results unless a large percentage of Americans, and people around the world, gets vaccinated.

The science denial, vaccine skepticism and falsehoods that are spewed on Fox News pose a clear and present danger to the health of many Americans. This dangerous rhetoric should be framed as such and make headlines in our major newspapers and television news. Sure, there are exceptions -- CNN's Brian Stelter, who regularly calls out Fox in his newsletter, has written a book that details the network's many distortions. But he is the exception rather than the rule.

Most major news organizations have aggressively covered the role of the Trump administration and statewide leaders, holding their feet to the fire on a regular basis over their inadequate response to the pandemic. But we don't see enough coverage about the media organization that has undeniably played a role in spreading so much disinformation that one study found that Fox News fans consistently practiced fewer preventative measures than CNN viewers.

So why is it that we don't see enough coverage about the dangers of the rhetoric coming from Fox News hosts? I believe it's a combination of two things: journalists, acting in their own interests, may be protecting the rights of the First Amendment for news organizations and operating under the outdated belief that Fox is still a news organization. As far as I can tell -- it's not. It does not appear as if Fox gathers the news in the interest of the general public. Instead, it seems to create an alternative news ecosystem that pushes a reality that is appealing to a large segment of America.

Does that sound familiar? Yes, it's like any other entertainment company that uses fiction and fantasy to profit from a huge audience. Worse, it is an entertainment company that creates a grave threat to our democracy and to the lives of all Americans. Fox News does not appear to be interested in science, facts or meaningfully engaging with opposing views -- it seems they are only interested in creating a mirage that will keep people watching.

You could say that Fox News is as powerful as most, if not all, Republican members of Congress. With the help of Donald Trump, the network sets the conservative agenda and like lemmings, most Republicans joyfully follow them off the cliff.

The real news media needs to start covering Fox News for what it is -- a propaganda arm of the far right that creates rather than covers the news. Whatever inhibitions remain about attacking colleagues in the journalism fraternity need to be abandoned because Fox News hosts have shown little interest in practicing the tenets of news and journalism. They seem to care more about entertaining.

After Tucker Carlson's rant Thursday night on why Americans should be wary of a vaccine that has proven to be over 90% effective against a virus that has killed more than 310,000 Americans and has been approved by the US Food and Drug Administration, he should have been plastered on the front page of every newspaper in the country.

Fox News hosts are too powerful and too influential over conservatives in America for other news organizations not to publicly highlight the dangers of the network's propaganda.