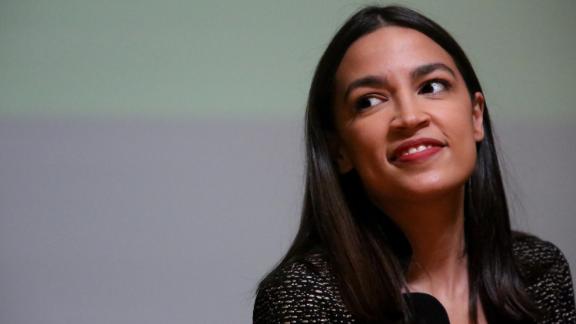 Democratic Rep. Alexandria Ocasio-Cortez opened up during an Instagram Live broadcast, in which she likened her situation to the trauma she experienced in the US Capitol riots.

The images of a right-wing mob sacking the Capitol in support of former President Donald Trump and his false claims of election fraud shocked the nation. Now, nearly a month later, Rep. Alexandria Ocasio-Cortez has come forward to describe what it was like inside the building, hiding and fearing for her life.

Her harrowing account, which she posted to Instagram Live on Monday night, is a reminder of just how violent the Capitol insurrection was, and how narrowly some of our elected officials escaped with their lives (others at the Capitol, including a police officer, weren't so lucky). And it's an unmistakable call to action: If we want to heal as a nation, we need real accountability -- not the denial and distractions many Republicans are offering.

In the live social media broadcast, Ocasio-Cortez described hiding in a bathroom, where she had fled after hearing " huge violent bangs on my door and then every door going into my office," she said. "Like someone was trying to break the door down. And there were no voices. There were no yells. No one saying who they were, nobody identifying themselves."

Then she heard a man who had entered her office, yelling, "Where is she? Where is she?" As she tried to keep completely still and silent, "I thought I was going to die," she said. Calling upon her spiritual beliefs, "I felt that if this was the journey that my life was taking, that I felt that things were going to be ok," she said, tearing up. "And that, you know, I had fulfilled my purpose."

Thankfully, she made it through the terrifying ordeal. The man in her office was a Capitol Police officer, but Ocasio-Cortez said he was behaving oddly and aggressively, and she certainly didn't feel protected (the behavior of the Capitol Police during the riot is now subject to significant criticism; two Capitol Police officers were suspended and another 10 are under investigation for their roles in the attack, according to CNN's reporting in mid-January. A House aide separately said there are as many as 17 officers under investigation as part of eight investigations into the insurrection at the Capitol.)

Ocasio-Cortez wound up in Rep. Katie Porter's office, still in shock and terrified, rummaging through closets to determine the best place to hide and, according to Porter, lamenting her decision to wear heels that day. "I knew I shouldn't have worn heels," Porter said Ocasio-Cortez fretted. "How am I going to run?" Porter's staff found her a pair of sneakers, "so that she could run, if she needed to literally run for her life."

Before the Capitol building was even fully cleaned up, and as the former president continued to spread the election fraud lie that incited the riot in the first place, Republicans were already calling on the country to "move on" and forget what we just endured.

But you can't walk on a broken leg before you repair the bone; you can't sweep an insurrection under the rug and assume it won't happen again.

Ocasio-Cortez had good reason to be frightened. One of the men who stormed the Capitol has been arrested for threatening to assassinate her. The social media posts of a great many of the rioters show that they were out for blood on January 6, and that they're not done -- next time, many of them have said, they'll bring guns.

Well before the riot, her office was fielding a huge number of death threats, and her staffers reportedly "stiffen" when someone unexpectedly knocks on her office door.

But it's not only physical violence Ocasio-Cortez has had to deal with since she won office in 2018. Conservative politicians and right-wing media made her a prime target of angry and often shockingly sexist rhetoric. One of Ocasio-Cortez's own colleagues, Rep. Ted Yoho, reportedly called her a misogynist slur to her face.

The only other politicians who come close to receiving the same amount of vitriol are House Speaker Nancy Pelosi, former Secretary of State Hillary Clinton, Rep. Ilhan Omar and Rep. Rashida Tlaib -- and what do all of those people have in common?

In her Instagram Live, Ocasio-Cortez also disclosed that she's a survivor of sexual assault. She didn't mention it simply for disclosure's sake, but to make the connection between how many Republicans are treating the assault on the Capitol and how so many people treat assaults on women's bodies. "The reason I say this and the reason I'm getting emotional in this moment is because these folks who tell us to move on, that it's not a big deal, that we should forget what's happened, or even telling us to apologize -- these are the same tactics of abusers," she said.

She's right. The demands to move on or forgive and forget aren't about healing; they're about escaping accountability. It's telling, too, that many of the people calling for unity without accountability are the same people who helped to break this country in the first place.

Rep. Kevin McCarthy, for example, said that Ocasio Cortez should accept Yoho's "apology" after his alleged and repulsive slurring of her because "when someone apologizes they should be forgiven." Never mind that Yoho never actually apologized, and instead simply claimed his passion for his country may have caused an unfortunate misunderstanding.

The same dynamic is at play with the Capitol riots. While some Republican lawmakers are rightly denouncing the attack, they're also pointing fingers, and not owning their own role. McCarthy was one of the leading voices in the election fraud lie, and he still refuses to fully accept responsibility for his words or actions. Instead, he's making plans with the former president to return the GOP to power and claiming that "we all" carry some blame for the attack.

He's far from the only Republican official to essentially say that the riot was unfortunate (though it is striking that he's by all appearances unwilling to do anything to prevent it from happening again), and while we're at it maybe this is all the liberal media and political left's fault anyway.

This is, as Ocasio-Cortez said, manipulation familiar to too many women (and some men, too). It leaves victims -- in this case, not just members of Congress, but the American people -- in a state of imbalance, at once trying to reconcile the gravity of what they experienced with the words of powerful, trusted people telling them that it was no big deal, they're partly to blame, and they should just get on with their lives. That kind of dissonance doesn't allow for healing. Instead, it trains us for acquiescence, shame, and self-doubt.

If you love someone, you don't attack them. And you certainly don't get to claim that you love someone and then incite an attack upon them, insist that the attack wasn't that bad, perhaps even blame them for it, and then demand they forgive and forget. But that's what so many Republicans are doing to the nation they claim to love today.

This is the cycle of abuse: simmering tension that leads to a profound violation, followed by denial, minimization, victim-blaming, justification, finger-pointing and diversion.

We're seeing this dynamic play out in real time at a national level. And a few brave lawmakers, including Ocasio-Cortez, are identifying it for what it is, and refusing to go along.

If we love our country -- if we truly want the best for this place, and not just the satisfaction that comes from mouthing the right words -- then we need to do the work of repairing this deep injury. That begins with a full understanding of what happened and full accountability for those who stormed the Capitol, those who encouraged them and those who now continue to cover for them.

PeaceHealth to require workers to get COVID-19 vaccine

Protesters show up to Springfield PD 'National Night Out'