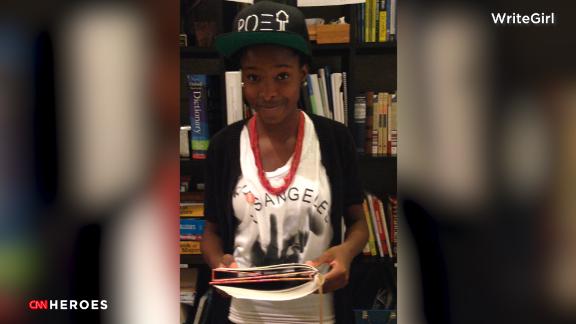 In 2014, Amanda Gorman was a budding young poet in Los Angeles.

As the then 16-year-old practiced reciting her poem "We Dragonflies" on video, little did she know her journey would lead her to deliver one of the standout moments during President Joe Biden's inauguration -- and to become the first poet to perform at the Super Bowl.

The 2014 video clip of Gorman -- which offers a glimpse into the early days of that journey --was recorded by the non-profit WriteGirl, a Los Angeles-based creative writing mentorship program founded by CNN Hero Keren Taylor.

Gorman joined WriteGirl when she was 14. She attended the group's monthly creative writing workshops throughout her high school years and was matched with volunteers for one-on-one mentoring.

"WriteGirl has been pivotal in my life. It's been thanks to their support that I've been able to chase my dreams as a writer," Gorman said in a statement announcing her appearance at Biden's inauguration.

Taylor describes Gorman as someone who made a big impression during her four years with WriteGirl.

"She's always been a very positive young person. Always with a flower in her hair, a sense of style, a sense of wanting to have her creative energy and uniqueness flow out into her physical self," Taylor told CNN.

In her early days of the program, Gorman did not seek the spotlight. It took some encouragement from her mentors to convince her to step up to the mic and share her work, Taylor said. And then she began to blossom.

"I think she really started enjoying the idea of seeing the reaction that people had to her words," Taylor recalled.

WriteGirl is celebrating its 20th anniversary. Each year, the program serves about 500 teens. They partner with mentors who include journalists, songwriters, poets, and fiction writers. WriteGirl boasts a 100% success rate in helping its seniors graduate from high school and enroll in college. The organization publishes books of its students' writing annually, and the publications have won more than 90 national and international book awards.

Hours after reciting her poem "The Hill We Climb" at the inauguration, Gorman spoke with Anderson Cooper on CNN. She credited her family, friends, supporters and mentors for their role in helping her achieve so much at a young age. She also cited her WriteGirl experience, "where I got a lot of free creative writing resources when I was that skinny girl with a speech impediment who needed a mentor."

While Gorman was with WriteGirl, her speech impediment was not something that Taylor and the group felt the need to address.

"We don't want you to feel like you have something that needs to be fixed, because none of us do," Taylor said of their philosophy, adding that their focus is on encouraging young writers. "You could see her confidence blooming every time she got up to the microphone."

Stepping onto the world stage

Taylor was beaming, crying, and went through half a box of tissues, she said, when Gorman took the stage at the inauguration.

"She was certainly nervous; you know she was. But she didn't show it. ... One thing we always talk about at WriteGirl is to turn that nervous energy into positive energy and let it drive you forward."

For Taylor, Gorman was not just representing WriteGirl, but young people, women of color, and young poets.

"They can see that young people's voices need to be listened to, that they have a lot to say about where we're at and where we need to go. And I was so proud of her for that more than anything."

6 Dr. Seuss books won't be published anymore because they portray people in 'hurtful and wrong' ways

4J paying for security to keep spectators away from games

Cinemark 17 to reopen soon in Springfield