Ted Cruz is an embarrassment to Texas 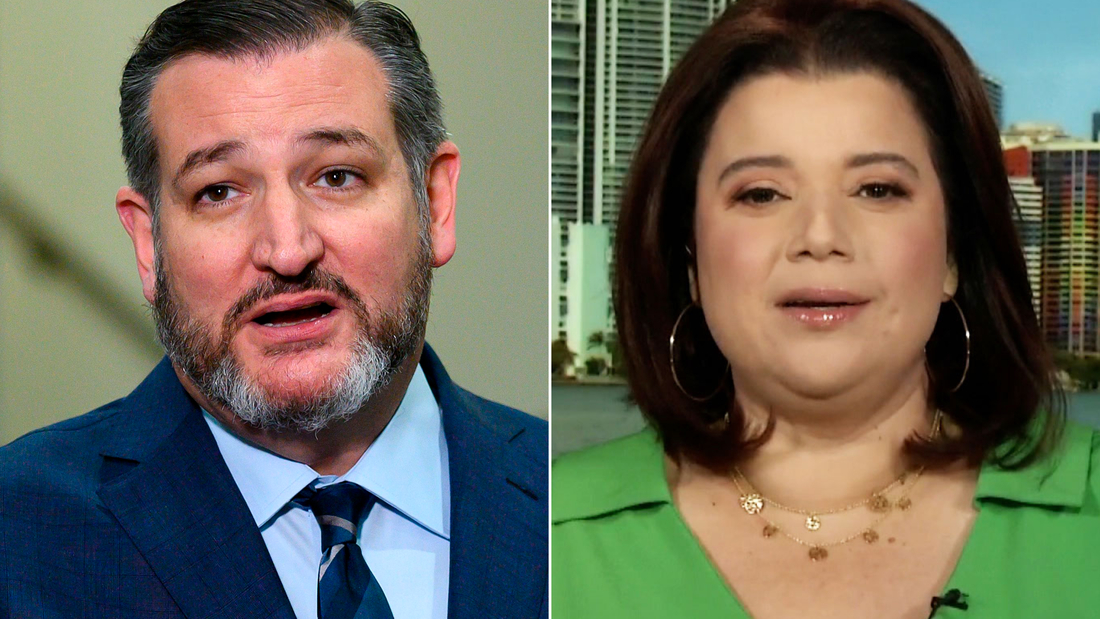 CNN's Ana Navarro says that Sen. Ted Cruz's (R-TX) family trip to Cancun, Mexico, while millions of people in his state were without power in freezing temperatures was "downright stupid."

Two images that have been circulating on social media capture the culture and government of Texas to a T.

One is a drone video showing Stateline Boulevard, the border road that divides the two cities of Texarkana, in Texas and Arkansas. On the Arkansas side, the pavement is cleared and plowed. The Texas roadbed is buried in snow.

The other image is that of Ted Cruz, Texas' Republican junior senator, traveling to Cancún, Mexico on Wednesday, while millions of his constituents were freezing at home, many without power, water or food.

What's the matter with Texas?

I have long insisted that a kind of frontier ethic still informs life down here in the Lone Star State. The old American myth of rugged individualism and self-reliance and neighbors helping neighbors. But that doesn't explain our overwhelming distaste for government.

Almost every conservative Texas politician elected in the modern era has won by running against perceived evils in Washington and Austin. The most successful of these anti-government outsiders have settled into long careers on the public payroll, with great government benefits like health care and pensions, which the regular citizens they serve have increasingly found difficult to acquire.

The winter storm that was too much for Cruz offers a clear example of the tragedies that can accompany policies that are too conservative to make sense, but calculated enough to make some people money.

Texas fancied itself as independent from the rest of the Union, so it built an electrical grid all its own. The entire purpose seemed to be avoiding federal regulation and keeping energy cheap. Washington would have no say about what we Texans did regarding fuel prices and service delivery. Nor would we stoop to buying or borrowing power from the rest of the country.

The real reason, of course, was profits for energy companies. Supply and demand are easier to manipulate when there are no federal laws protecting consumers and the grid. The energy industry was able to ignore warnings about winterizing its natural gas, coal, and oil-powered infrastructure. We're Texas. We don't have those problems.

Until we do. Which is just another manifestation of anti-government, fossil-fuel-fixated conservatism that denies climate change.

The Texas grid, operated by the ironically named Electric Reliability Council of Texas, (ERCOT) collapsed because it was not designed or equipped to handle extreme weather like the current deep freeze. ERCOT supplies about 90% of the state's power, but does not pay plants to be on standby for emergencies, which means electricity prices can dramatically spike during peak demand.

Our governor, Greg Abbott spread a profound lie on conservative television that frozen windmills and solar caused the power failures that left millions freezing in the dark. He blamed the Green New Deal, which does not presently exist. He failed to note that renewables make up barely more than 10% of the state's total energy supply.

Abbott's predecessor, Rick Perry, suggested that Texans would rather suffer days of blackouts than submit to Washington's oversight. He said this even as people were freezing to death in their cars and homes; at least 21 people have died. Perhaps, their final thoughts were that they were grateful to Texas for the state's superior energy independence.

In Texas, we have learned never to expect much more than entertainment from our government and politicians. In that department, we are as grand as our legend. Last August, Cruz boldly mocked California's electricity problems during their heatwave and fires, tweeting that the state was "unable to perform even the basic functions of civilization, like having reliable electricity."

More hilariously, Cruz ridiculed the Austin mayor for flying to a Mexican beach during Covid after urging his city's residents to stay home.

Senator Sensitive will be performing his comedy act for at least four more years.

But Ted Cruz, as Texan Jimmie Dale Gilmore sings, is "just a wave, not the water." The state's governmental infrastructure is over-populated with people who brag about a pay-as-you go government while avoiding political criticism by hiding taxes in bonded indebtedness approaching $60 billion.

The state's gas tax has not been raised since 1991, and consequently road construction is being increasingly privatized and monetized for corporations that charge onerous tolls for profit.

To constrain Washington's reach in Texas, the past two governors have refused to expand Medicaid, which leaves about 5 million residents without health insurance, including an estimated 625,000 children.

And because conservatives have an aversion to an income tax, they have made Texas over-reliant on property taxes, unless, of course, you are a corporate interest looking for a handout or huge tax abatements.

We Texans ought to be embarrassed. But Cruz has shown how our state's conservatives avoid embarrassment by being slippery and disingenuous. Caught out at the airport -- taking vacation in the midst of a pandemic and energy crisis in his home state -- Cruz later admitted to a mistake in judgment. But not before he tossed his own daughters under the wheels of the plane.

The father of the year said he wasn't abandoning his state during a deadly emergency, he was lovingly protecting his girls by escorting them to Cancun to make sure they were safe.

The people he left freezing in Texas were not.