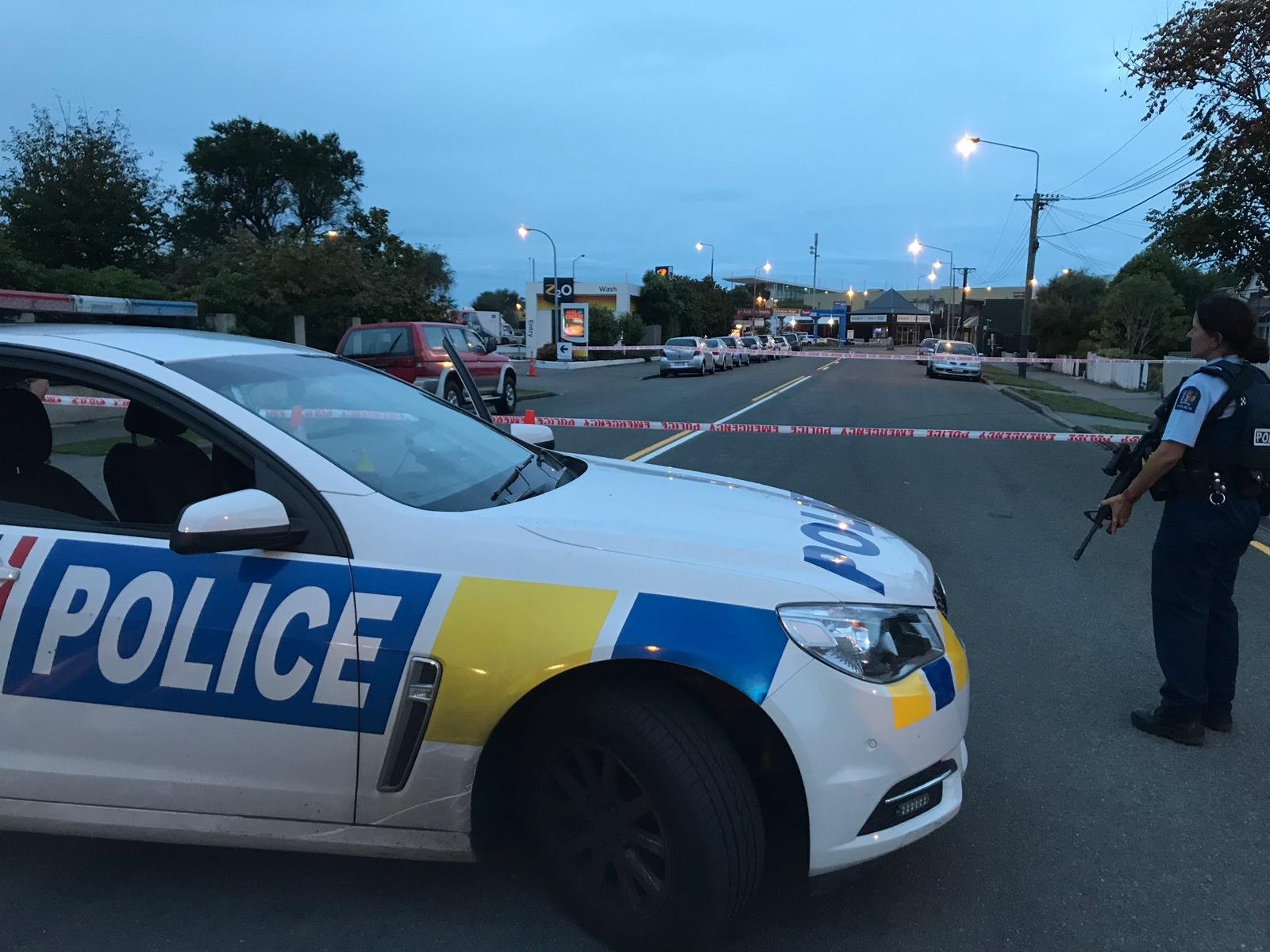 At least 49 people were killed and 20 seriously injured in...

At least 49 people were killed and 20 seriously injured in mass shootings at two mosques in the New Zealand city of Christchurch Friday, in a carefully planned and unprecedented attack that has shocked the usually peaceful nation.

New Zealand's Prime Minister, Jacinda Ardern, called the incident a terrorist attack in a Friday press conference, saying the suspects held "extremist views" that have no place in New Zealand or the world.

A total of 48 people, including young children with gunshot wounds, were admitted to Christchurch hospital for treatment.

Three people were arrested in connection with the shootings. A 28-year-old man was charged with murder and will appear in court Saturday morning local time.

Two others were arrested on possession of firearms and police are still trying to understand their involvement, said New Zealand Police Commissioner Mike Bush. On Friday night local time police tweeted that the pair remain in custody.

Australian Prime Minister Scott Morrison said that at least one of those arrested is Australian. He said the shooting was the work of an "extremist right-wing, violent terrorist."

Police said they do not believe there are any other suspects but added that it was still an open investigation.

None of the three people arrested in connection with the attacks had been on any security watch lists prior to the attack.

Authorities said they "will not be discussing the offenders' possible motivations or the causes of this incident" at this stage.

However, in a social media post just before the attack, an account that is believed to belong to one of the attackers posted a link to an 87-page manifesto that was filled with anti-immigrant, anti-Muslim ideas and explanations for an attack. The manifesto was not signed.

In addition, police are aware of a video shared online and broadcast live during the attack, which purports to show a gunman walking into an unnamed mosque and opening fire.

"We would strongly urge that the (video) link not be shared. We are working to have any footage removed," the New Zealand police said.

In a statement, a spokesperson for Facebook New Zealand, Mia Garlick, said videos that appeared to show the Christchurch shootings were quickly taken down.

"New Zealand Police alerted us to a video on Facebook shortly after the livestream commenced and we removed both the shooter's Facebook account and the video. We're also removing any praise or support for the crime and the shooter or shooters as soon as we're aware," she said.

CNN has not been able to independently confirm any information about any of the attackers or the the alleged video at this stage.

A spokesperson for Google and YouTube issued a statement calling the shooting a "terrible tragedy."

"Shocking, violent and graphic content has no place on our platforms, and is removed as soon as we become aware of it," read the statement. "As with any major tragedy, we will work cooperatively with the authorities."

Twitter has removed an account it believes is linked to the suspect in the shooting and is working to keep the video of the incident off its platform, a spokesperson said.

"We are deeply saddened by the shootings in Christchurch today," Twitter said in a statement. "Twitter has rigorous processes and a dedicated team in place for managing exigent and emergency situations such as this. We also cooperate with law enforcement to facilitate their investigations as required."

Police Commissioner Bush said 41 people were killed at the al Noor mosque on Deans Avenue. Seven people died at the Linwood mosque on Linwood Avenue, and one person died from their injuries in hospital. Both of the mosques targeted in the attacks are in Christchurch city center. Police placed the two locations on lockdown.

Two improvised explosive devices were attached to a vehicle as part of the attack. One device has been disabled and authorities are working on the other.

"This goes to the seriousness of the situation," Bush said.

A number of weapons were also recovered at both the Linwood and Deans Avenue locations.

Police were still treating the incident as ongoing into Friday evening local time and urged Christchurch residents to stay indoors and monitor the police website and social media.

The situation was also considered not limited to Christchurch, and Bush asked "anyone who was thinking of going to a mosque anywhere in New Zealand today not to go. To close your doors until you hear from us again."

Police also evacuated properties close to a "location of interest" in the southern city of Dunedin, some 225 miles from Christchurch late Friday night local time.

Evacuations were made as a precaution, according to police, and alternative accommodation has been provided for residents.

"There is no further information available at this time," police said on Twitter.

In a press conference, Prime Minister Ardern described the attack as "one of New Zealand's darkest days."

"What has happened here is an extraordinary and unprecedented act of violence," she said, adding that the attackers have "no place in New Zealand."

"For now my thoughts and I'm sure the thoughts of all New Zealanders are with those who are being affected and with the families," she said.

Police said they have mobilized every national police resource to respond to the incident.

Armed police were deployed after first receiving reports of the shootings at 1:40 p.m. Friday local time. It is the busiest day for many mosques around the world when Muslims convene for Friday prayers.

Speaking to CNN, witness Mohan Ibn Ibrahim said he was inside the mosque when the shooting began and that he heard the gunman "continuously shooting for 10 to 15 minutes."

"It's a big mosque and there were more than 200 people inside. The gunmen came from the backside. Gunshots went on for a long time. We had to jump the wall to escape. I saw lots of broken glass and bricks on the backside of the mosque," he said.

"I came to the street I saw one person got shot on his chest," he said, adding that the ambulance and police then arrived on the scene.

He said that he had a friend in another mosque in the area who told him a gunman had opened fire there as well and five people were dead.

"I could not contact two of my friends who are in the mosque as well," he said.

One witness, who did not want to be named, said he was driving by the scene and saw a man with a "with his 3- or 4-year-old daughter" who had been shot in the back.

"He was screaming like get her to the hospital and the ambulance couldn't come in until it was secured so I just got my truck and loaded up him, and his daughter, and this other guy had been shot in the leg, and took them to the hospital," he said.

One man outside the mosque said that he prayed that the gunman would "run out of bullets."

"I was thinking that he must run out bullets you know, so what I did was basically waiting and praying to God, oh God please let this guy run out of bullets," he said. He said a man told him to remain still and then the gunman shot the man "straight in the chest."

Christchurch was put on lockdown, with all schools and council buildings shut and roads closed across the city.

By 6 p.m. local time New Zealand police said the lockdown on schools had been lifted.

The shooting at the mosque on Deans Avenue next to Hagely Park, is near to Cathedral Square, where children were taking part in a global protest to raise awareness for climate change.

"If your child was attending the climate change protest in Cathedral Square and you want to check if they are in the Civic Offices, please call the Council Contact Centre on 03-941-8999," Christchurch City Council said.

Christchurch is a coastal city of around 400,000 residents. It is the third most populous city in New Zealand behind Auckland and Wellington. It has an agricultural economy.

In 2010 and 2011 the city suffered a series of devastating earthquakes, with the most destructive at 6.3 magnitude, which killed nearly 200 people and destroyed thousands of buildings.

Just 1% of New Zealand's population of almost 5 million are Muslim, according to government statistics, less than 50,000 people in 2013.

Journalist Chris Lynch, a radio host on New Zealand station ZB Radio, told CNN that one of the shootings had occurred at "the biggest mosque in all of Christchurch."

He described Christchurch as a "very peaceful city" that is still getting over the devastating 6.3 magnitude earthquake that hit in 2011.

"That (earthquake) brought all the skyscraper buildings down and this is one of the reasons why people are fearful, I feel," he told CNN.

Australian Prime Minister Morrison said he has asked for flags to be flown at half-staff out of respect for those killed in the attack.

"Australians stand with all New Zealanders today during this dark time where hate and violence has stolen their peace and innocence. Kia kaha (stay strong)," Morrison tweeted earlier.

US President Donald Trump said in a tweet: "My warmest sympathy and best wishes goes out to the people of New Zealand after the horrible massacre in the Mosques. 49 innocent people have so senselessly died, with so many more seriously injured. The U.S. stands by New Zealand for anything we can."

In a statement, the White House said: "The United States strongly condemns the attack in Christchurch. Our thoughts and prayers are with the victims and their families. We stand in solidarity with the people of New Zealand and their government against this vicious act of hate."

Yousef bin Ahmad Al-Othaimeen, the Secretary General of the Organization of Islamic Cooperation (OIC), condemned the attacks. The OIC represents 57 nations with large or majority-Muslim populations.

"The brutal crime had shocked and hurt the feelings of all Muslims around the world, and served as a further warning on the obvious dangers of hate, intolerance, and Islamophobia," he said. Othaimeen urged the New Zealand authorities to investigate the attack thoroughly.

Sadiq Khan, the mayor of London, tweeted his condolences to the victims of the attack, and confirmed that there will be "highly visible" and armed police around mosques in the UK capital on Friday.

"I want to reassure the Muslim communities in London. I have been in touch with the Met Police. There will be highly visible policing around mosques today, as well as armed response officers, as Londoners go to pray," he said.

UK Prime Minister Theresa May sent her "deepest condolences" in a tweet.

"My thoughts are with all of those affected by this sickening act of violence," she wrote.

France has also stepped up security at places of worship in the light of the shootings.

Symptoms and risks of novel coronavirus

Local stores sell out of respirator masks amid coronavirus fears