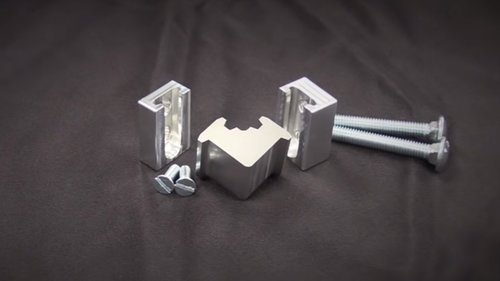 In the era of mass shootings, some high school teens are taking their safety into their own hands.Two groups of high school students have been recogni...

In the era of mass shootings, some high school teens are taking their safety into their own hands.

Two groups of high school students have been recognized in a nationwide contest for developing contraptions that would increase safety during a school shooting.

A team from Owensville High School in Owensville, Missouri, designed a simple auxiliary steel lock that would add an extra layer of protection to classroom doors.

And students from Richland Two Institute of Innovation in Columbia, South Carolina, devised an electromagnetic system that remotely locks doors and covers windows to seal off classrooms from threats.

The groups are two of 10 national finalists in Samsung's 2018-19 Solve for Tomorrow contest, which challenges students to use STEM skills to address real-world problems.

Their efforts come as schools across the United States have installed metal detectors, added resource officers and armed teachers in the wake of the February 2018 shooting that killed 17 people at Marjory Stoneman Douglas High School in Parkland, Florida. Since then, by CNN's count, there has been a school shooting about every 12 days in the United States.

"We thought (school shootings were) a big problem and we decided we could do something about it to put students and teachers in more control of their own safety in case of a school shooter," Owensville senior Paige Tayloe said.

Making it harder for intruders to get in

The Owensville students created a steel door lock that can be added to any door.

The design consists of two brackets. One goes on the door, and the other goes on the doorjamb. A third piece slides into the brackets to lock the door from the inside -- out of view of a potential shooter.

Because typical door locks can be quickly dismantled with a firearm, the students' invention would make it harder for an intruder to get into a classroom.

The contraption is simple to use, said sophomore Jonah Hoffman, one of the students on the Owensville team. The students have already installed it on one classroom door and plan to mass-produce it for the rest of the school, as well as for neighboring schools.

Locking down classrooms in an instant

In South Carolina, nine Richland Two students devised an electromagnetic door lock and curtain system. With the press of a remote button, the wireless system could close and lock classroom doors and lower curtains over the doors' windows.

The idea stemmed from students' frustration with the school district's security measures, which required teachers to keep doors closed at all times.

"With the recent uptick in shootings and concerns for school safety, we were asked to close our doors," instructor Kristin Bullington said. "The students were a bit frustrated by that and wanted to look for a solution."

"Most of our campus is very open and we love using the space," Taylor said. So the students sought to "find a way to have everyone working throughout this space" but also quickly close doors if needed, she added.

The students are excited by the idea that their creation could apply to other businesses, offices and even airports.

"Enthusiasm grew as they realized they hadn't just completed a project for class," Bullington said, "but created a solution that really could be implemented in their community."

As national finalists, the schools will receive $50,000 in Samsung technology and classroom supplies. They will travel to New York for a pitch event on April 1 to compete against eight other schools for a grand prize of $100,000 in tech and supplies.

Civic Park will hold its grand opening on June 6

A CBP employee killed his wife and two sons before fatally shooting himself, police say