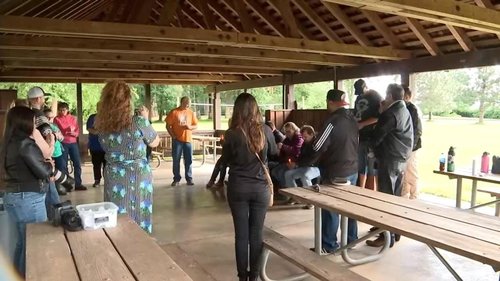 NEAR HOPEWELL, OR (KPTV) -- It’s been two weeks since Karissa Fretwell and her son William, who also goes by Billy, disappeared.

Monday night, friends of hers held a vigil at Maud Williamson Park near Hopewell, praying for their safe return.

Friends, community members, and even strangers came together for the mom and son who’ve become near and dear to them.

"I am hopeful, very much," Moats said.

She says it’s not a memorial for Karissa and Billy; it’s the opposite, a show of support for their safe return.

"We’re trying to remind people that we’re still out here looking, we’re still hopeful, we’re still looking for answers, and that it’s just important that anyone who has any information to come forward no matter how small or big it may seem," Moats said.

Those who came called Karissa a fighter and a survivor.

The 25-year-old and her 3-year-old son have been missing since Karissa didn’t show up for work on May 13.

"It's terrible," David Villarreal Jr., who was just getting to know Karissa, said.

He'd only been working with her a short time when she disappeared.

"I feel better now that I came," he said.

Moats says it’s been a tough few weeks and that recent updates in the search are disheartening.

On Friday, Billy’s biological dad, Michael John Wolfe, was booked into the Yamhill County Jail on charges of aggravated murder and kidnapping in their disappearance.

Search and rescue teams have spent days scouring a rural area near Hopewell, with no sign of the two.

According to court documents, Karissa Fretwell and Wolfe had William together in 2016, but she filed for a court order in 2018 to prove Wolfe was the father. Wolfe was served with that order last July, after it was determined he was William's biological father. Wolfe was ordered to pay child support and health insurance for his son, according to an order that went out last month.

"We’d hate to think the worst ya know and we just hope and pray that that's not what it is," Villarreal said.

Oregonians to receive more than $200M in COVID-19 relief

Moving of American flag was not a protest, Cottage Grove business says

OSP investigating string of shootings on I-5

Here's what the CDC recommends schools do as they reopen