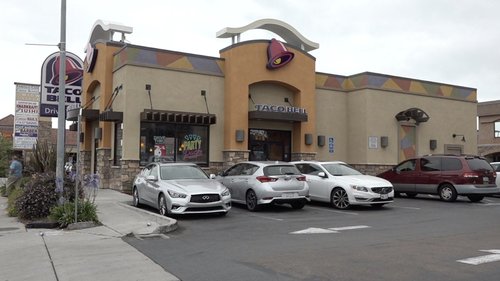 SAN DIEGO, CA (KGTV) -- A trip to get some fast food in the Midway District turned into a nightmare after an encounter with a homeless woman and a syringe.

Just before noon last Thursday, Ralph Bedoe was in the drive-thru line at a Taco Bell on Midway Drive. It was the busy lunch hour. He ordered but had to wait once he reached the pay window. As he waited, he saw a homeless woman in her 40s about 25 feet away.

"She was rambling, throwing up her hands, talking to herself," said Bedoe.

He says the woman hit the hood and window of a bus in the parking lot, before she headed toward him.

"She kind of hit my mirror and started rambling ... I said 'Do you need something?' Don't know if that's when something triggered," said Bedoe.

Bedoe's driver side window was open. His arm was resting there.

"All of a sudden she pulled up her left hand, which had a bag and a syringe with a needle sticking out. She pushed my hand into the car, and when she pushed my hand, the syringe entered my hand," said Bedoe.

The woman then smacked his window and wandered off.

"Disbelief, hoping you're going to wake up from this," said Bedoe.

As the shock wore off, the new father thought of his 6-month-old son.

Bedoe must undergo seven months of blood tests to rule out a myriad of diseases, including Hepatitis and HIV. The uncertainty is nerve-wracking.

"A trip to Taco Bell should not end with a life-changing event," said Bedoe.

Bedoe was hit with a $3,400 dollar medical bill because he was switching over to new insurance and was not covered at the time. Police have obtained surveillance video from Taco Bell, but haven't yet released it.

Man hit by car near Chambers St and 11th Ave

Fire at car lot off Coburg Road under control