The forgotten crisis that has displaced 1.2 million people 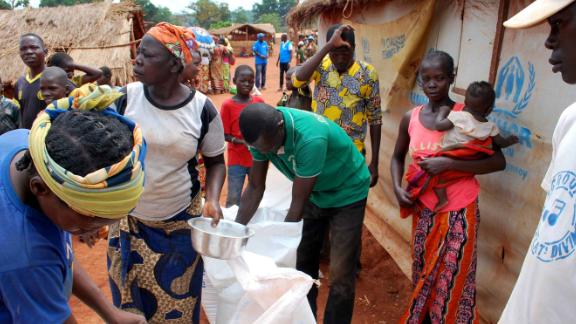 The Central African Republic is next to bottom in the UN's human development index. After Syria and Yemen it is the world's worst humanitarian crisis. CNN sat down with CAR's President Faustin-Archange Touadéra.

From the air, the camp at Bria looks like a small town, with warrens of metal shacks glinting amid the dusty red clay. And in many ways it is, an enforced sanctuary for 65,000 people desperate to escape the militias that roam this part of the Central African Republic (CAR).

People have fled to this camp from surrounding villages to escape an epidemic of murder and rape fueled by sectarian and ethnic hatred. They represent just a fraction of a humanitarian crisis that threatens to overwhelm the country.

Six years of fighting, involving a bewildering array of rebel groups, have left 1.2 million people displaced, nearly a quarter of the national population. Just under half of CAR's people are food insecure, according to the World Food Programme (WFP). The latest UN Development Index ranked CAR 188 out of 189 countries, above only Niger.

This African crisis is on a par with those in Yemen and Syria but gets much less attention than either -- perhaps because CAR, a landlocked country of abject poverty, has never seemed as geopolitically significant as those other cases.

Bria is a two-hour flight from the capital, Bangui, over an endless canopy of rain forest and snaking rivers. CNN visited the camp on what the WFP's country director, Gian Carlo Cirri, described as 'a good day.' An aid convoy had just arrived, ensuring that for the next week at least people would have enough to eat. It had taken five weeks to reach Bria from the capital.

Hundreds queued in the broiling midday heat for their ration of rice and oil, watched over by a handful of Zambian soldiers who are in CAR as part of the UN peacekeeping presence known as MINUSCA.

'We rely on armed escorts to bring in our food,' said Cirri. More than half the tracks across CAR (there are only a handful of metaled roads) are unsafe; there were 396 attacks on aid workers in 2018. In a country that has just a few hundred trained soldiers and where the government controls about a quarter of the territory, aid convoys must be protected by the UN peacekeepers. But they too are overstretched -- there are 13,000 UN 'blue helmets,' as the troops are known, in a country the size of Texas.

'There is an additional difficulty with the terrain,' Cirri said. 'We are entering the rainy season. So some parts of the country won't be accessible with our trucks.'

The majority of people in the Bria camp are women and children. Many of the men in this part of the country have been killed; some have joined one or another rebel faction just to earn a pittance.

Lavender Clemence appears to be in her late 30s. Surrounded by her children, she produces a photograph of her husband. He was beaten to death by one of the rebel groups, for whom arbitrary killing is a stock-in-trade.

Lavender says the camp is more like a prison than a refuge. 'I am always suffering. I even had to sell some of my peas and rice to have some spending money,' she told CNN.

'As soon as I can go home I will,' she said. 'I cannot suffer here any longer.'

But many thousands of the camp's residents have been hoping to return home for three years. And they know it's unlikely anytime soon. Just a few weeks previously, a woman who had gone just over a mile from the camp was raped and murdered.

The conditions may be a notch above destitute, but beyond the berms that surround the camp lies the very real prospect of being killed.

The lack of security and accessibility, inadequate funding and the proliferation of weapons are just a few of the overlapping crises in CAR, making the delivery of aid a constant headache for aid agencies. This is a life support mission; development seems like a pipe dream.

In some ways the country seems as if in the grip of a collective psychosis. Violence can erupt out of the smallest disputes. The armed groups roaming the countryside are fighting for power and resources; they are not driven by ideology.

Atrocities are so frequent that they rarely get reported beyond CAR's borders. While CNN was there, 50 villagers were corralled and shot to death in attacks by one of the rebel factions in the remote north-west. One villager told the NGO Medecins Sans Frontieres: 'They piled us on top of each other, then started shooting. It felt like it was raining bullets.'

The killing is yet to ebb despite a peace agreement signed in Bangui in February between 14 rebel groups and the government. One problem is that the group leaders often have little communication with or control over followers.

Another is that, thanks to the peace agreement, rebel leaders have been given government positions. There's widespread resentment that instead of being held accountable, they are being rewarded.

President Faustin Archange Touadera, a former math professor who was elected in 2016, has made security his overriding priority. 'On the last 30 years we have endured cyclical crises which every time destroy the base of our economy and increase the difficulty for our population,' he told CNN.

'We have to find peace again, security ... The armed groups that are the authors of this conflict are still armed, so we have to disarm them. We have to rebuild the national army,' Touadera added.

This is slowly happening, with European Union and Russian training missions. But few units of the army or gendarmerie security forces are yet able to stand on their own feet.

The history of CAR gives little ground for optimism. The latest peace deal is the eighth since the country collapsed into chaos in 2012. It might sound as though CAR is beyond help, but the resilience of its people and their deep yearning for peace offer a glimpse of hope.

On a journey through the southwest of the country, one of the few regions not ravaged by fighting, we saw fields being planted, new village clinics and small aid groups getting into rural areas to tackle problems like maternal mortality. The town of Boda, where hundreds were killed in Muslim-Christian violence in 2014, is now at peace.

Touadera sees the potential of his country. It is rich in minerals and has huge tracts of fertile land. He says he has hope, 'as long as we start working, we get engaged and united, rather than staying stuck in divisions and hatred and being vengeful.'

Much will depend on whether the rest of the world cares enough to help.