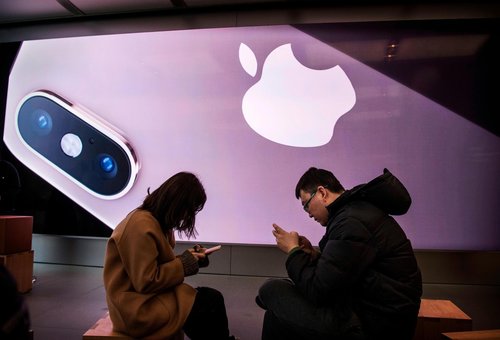 Apple has suddenly become one of the most polarizing stocks on Wall Street. Shares of Apple fell more than 2% Monday after an analyst at Rosenblatt Securitie...

Apple has suddenly become one of the most polarizing stocks on Wall Street. Shares of Apple fell more than 2% Monday after an analyst at Rosenblatt Securities downgraded the iPhone maker's stock to a "sell."

Three analysts now rate Apple's shares a "sell," according to data from Refinitiv. Another 18 analysts have Apple rated a "hold" — which many on Wall Street view as essentially the same thing as a sell. And 23 analysts think Apple is a "buy."

Right now, the Apple bulls still appear to have the upper hand. The stock is up more than 25% this year, making it one of the best performers in the Dow so far in 2019.

But Jun Zhang, the Rosenblatt analyst who downgraded Apple on Monday, paints a pretty bleak picture for Apple for the rest of the year.

"We believe new iPhone sales will be disappointing, iPad sales growth will slow in the second half of 2019 [and] other product sales growth, such as the HomePod, AirPod and iWatch, may not be meaningful to support total revenue growth," Zhang wrote in a report Monday.

Zhang said the iPhone XS may wind up being "one of the worst selling iPhone models in the history of Apple."

And even though service sales growth has been strong for several quarters thanks to Apple Music and Apple News, he believes that growth will start to slow.

It's notable that Zhang — whose official title at Rosenblatt is China analyst covering tech, media and telecom — did not cite any specific concerns about Apple sales in China. Apple's warning on that market stunned investors earlier this year.

The bull case for Apple

Another analyst who looked at China demand came away with a far more bullish outlook for Apple.

Dan Ives, an analyst at Wedbush, said in a report Sunday that he remains positive on global iPhone demand, adding that thanks to some recent price cuts in China, there seems to be a "slight uptick" in production from Apple suppliers.

He added that there haven't been any "cracks in the armor" for Apple in China, despite worries about China retaliating against US tech firms in light of the US ban on equipment from Chinese tech and telecom giant Huawei.

Ives estimates that between 60 million and 70 million Chinese consumers could be in need of upgrading to a newer iPhone over the next 12 to 18 months.

And even Zhang, the Rosenblatt analyst, conceded there are several reasons why investors shouldn't necessarily bet against Apple.

Zhang pointed out in his report that Apple's most recent earnings guidance was "stable," the company has plenty of cash, and it has a "meaningful" stock buyback program in place that helps boost earnings per share by reducing the share count.