How can the coronavirus spread through bathroom pipes? Experts are investigating in Hong Kong 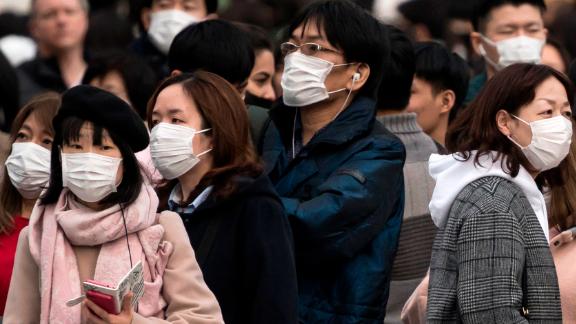 Early Tuesday morning, health officials in Hong Kong partially evacuated residents from an apartment block over fears the coronavirus may have been transmitted via the building's pipes.

A 62-year-old woman was diagnosed with the virus about a week-and-a-half after a 75-year-old man in the same building became infected.

Three more cases have since been linked to Hong Mei House. The woman's son, his wife and her father have been diagnosed with the virus. The mother, son and wife share an apartment.

The two initial cases set off alarm bells among health officials that the virus could have been transmitted through pipes in the building. In densely populated Hong Kong this could lead to hundreds of people becoming infected in the supposed safety of their own homes.

In Hong Mei House, the two initial patients with coronavirus lived 10 floors apart, but were on the same vertical block of apartments -- number seven. Health authorities evacuated residents living in apartments numbered seven on all 30 floors of the building because their toilet discharge pipes were linked.

The possibility of the virus being transmitted through pipes immediately drew comparisons to the 2003 SARS outbreak, when this method became a major source of transmission. At the Amoy Gardens housing estate, there were more than 300 infections and 42 deaths after defective plumbing allowed the virus to spread through the building.

An investigation was launched Tuesday, but officials were quick to defend the building's sewage system as safe. Instead, Hong Kong housing minister Frank Chan said at a press conference that an initial investigation potentially pointed to a bathroom pipe of the second patient that could have been altered.

'A preliminary investigation revealed that the 307-room unit in which the second patient lived may have done self-refitting exhaust pipes,' he said.

The Hong Kong government also posted a photo on social media showing that a pipe in the apartment's bathroom had been altered.

But could this have led to a possible spread of the virus?

The evacuation at Hong Mei House was a precaution.

While scientists are still investigating how the virus spreads, they believe it is mainly transmitted by direct contact, such as touching someone's hand, and through droplets, for example, an infected person sneezing or coughing on someone else.

Therefore, the virus could have spread through the apartment block through close human contact or the shared use of elevator buttons.

But because the two patients lived directly above one another, and the initial inspection found that a pipe had been disconnected from the bathroom's waste pipe, authorities decided to investigate whether the virus could have spread through the building's sewage system.

Ivan Hung, chief of the Infectious Diseases Division at Hong Kong University, told CNN that early studies of the novel coronavirus suggested it is present in faecal matter, though investigations are still ongoing as to what extent the virus could be transmitted this way.

Microbiologist Yuen Kwok-yung said at a Tuesday press conference that an improperly sealed pipe could have resulted in a virus transmission, by carrying infected feces into the building's ventilation system and blowing it into people's bathrooms.

'As the pipeline that transfers feces is connected to the air pipe, it is very likely for the virus in the feces to be transmitted through the air fan into the toilet,' Yuen said.

So how does this work?

Every toilet, sink, and floor drain has a U-shaped pipe, which prevents sewer gases from entering the home and allows waste water and odors to escape. To work properly the U-shaped pipe, also known as a U-trap, needs to hold water in its bend.

These pipes connect to what's called a soil pipe, also known as a discharge pipe, which washes the waste away from the toilet, sink or drain.

The soil pipe needs to have a vent pipe connected, which ensures the sewer gases and odors are carried away -- usually through a vent in the roof. The vent pipe also makes sure that pressure in the drain is equalized so waste water keeps flowing.

'If you imagine the pipe linking all the toilets in the same unit on different floors -- it's like a Christmas tree,' said Hung.

During the SARS crisis, at Amoy Gardens the U pipes connecting to the floor drains were empty of water, according to a local investigation. That allowed virus-laden droplets coming down the pipes from other apartments to collect in the U-bend. Without the water to form a liquid plug, nothing stopped it from entering the bathroom.

'When the U-shaped pipe was not filled with water, the air in the discharge pipe of the bathroom can enter the indoor environment. Especially once the extraction fan in the bathroom is turned on,' said Yuen.

Hong Kong officials have said Hong Mei House is different from the SARS scenario, however, because of the design of the pipes ensures water is always in the U-bend.

Tse Chin-Wan, undersecretary for the Hong Kong Environment Bureau, said on Tuesday that the pipes in Hong Mei House were not faulty.

Unlike at Amoy Gardens, their floor drains were connected to the sink of kitchens or washing basin, meaning the U-bends were always full with water.

Ivan Hung, chief of the Infectious Diseases Division at Hong Kong University, told CNN the SARS case was 'very different and much more serious' owing to a highly infectious patient and the virus being airborne.

As many as two-thirds of the patients in the Amoy Gardens outbreak had diarrhea, and that meant a large viral load -- the quantity of virus -- would have been discharged into the faulty drainage system.

But how can others get infected?

In Hong Mei House, authorities are still investigating a modified vent pipe that could have allowed the virus to spread.

'There are reasons to believe that confirmed cases of low-level units are caused by improper modification of toilet exhaust pipe,' Leung Kar-ming, the district councilor representing Hong Mei House, told CNN in an email.

'It is to (be) believed at this stage it is due to improper modification of individual unit (307) where parts of the pipe were cut off and removed permanently.'

One possibility is that infected material from the first patient's apartment could have traveled down the pipes and entered the room via the broken vent in the second patient's bathroom.

'If the patient is in the toilet and reading a newspaper, or whatever he's doing, then he will be exposed to this infected air,' said Hung.

While the investigation into the building continues, Hong Kong's Center for Health Protection has advised the public to maintain drainage pipes by regularly pouring water into drain outlets -- the U-pipes -- and to put the toilet lid down before flushing 'to avoid spreading germs.'

If it does emerge that the virus can travel through pipes, it will mean that residents staying at home to avoid the virus might be at risk in the place they felt most safe.

No charges for Elk Horn protesters; city declines to prosecute