Investigation into virtual classroom sexual misconduct: ‘It can feel so innocent until it’s not’ 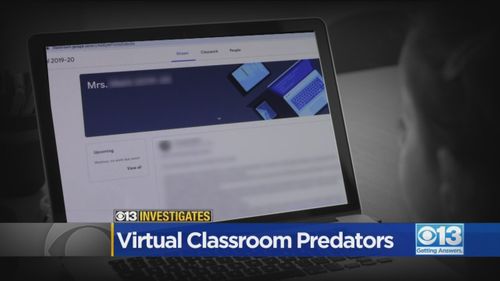 SACRAMENTO, CA (KOVR) -- From sexual harassment inside virtual classrooms to texting and social media conversations between teachers and students, virtual learning is leading to new concerns about sexual misconduct.

CBS13 has discovered an apparent lack of policies in place to protect children from sexual predators in the virtual learning world.

Mireya never imagined that her fourth-grade daughter could be victimized inside her virtual classroom while she was just feet away.

“She was right here in the dining room table and within five minutes, she ran over there to me and she started crying,” Mireya said. “I would have expected a teacher to be there to supervise them.”

Instead, her daughter was alone inside a Google Meet video chat room with a classmate who she says exposed himself and performed a sex act. Just minutes before, Mireya says she was the one who helped her daughter log into the Google Meet through a link her teacher had posted in their virtual classroom.

The teacher wasn’t supervising the Google Meet or recording the classroom, so the school later told CBS13 that they struggled to even investigate the incident, which left Mireya’s daughter traumatized.

“She can’t sleep, she’s terrified to see him in (virtual) class,” Mireya said. “She doesn’t want to go back.”

Internet safety advocate Thomas Dodson says schools can’t prevent all virtual harassment, but there should be standard safeguards in place.

“If the teacher can’t be there in my classroom digitally, that they need to be recording it,” Dodson said.

But Dodson says student-on-student harassment is just one of the increasing virtual risks, pointing to a recent spike in inappropriate relationships between students and teachers.

“The vast majority of it has a digital element. It starts online,” Dodson said.

Dodson points to a recent report citing more sexual misconduct moving online amid virtual learning in Chicago public schools. The district’s inspector general cited an increase in “sexual acts” allegations and said teachers have faced the most allegations this year.

Just last month, a jury convicted a West Sacramento man of luring a 12-year-old former student for sex via Instagram and more than 400 California teachers have had their licenses revoked for sex-related crimes since 2013.

Now, amid the pandemic, Dodson points out that teachers are increasingly communicating with students via text or social media. “It can feel so innocent until it’s not,” Dodson said.

CBS13 surveyed local districts about their policies for supervision “inside” virtual classrooms and student-teacher communication “outside” officials platforms.

We found that the policies varied greatly, and some districts have no specific policies related to virtual classroom supervision or student-teacher interaction via private communication.

The California School Board Association (CSBA) does offer recommend language for school policies related to student-teacher communication, but schools are not required to adopt it and CSBA tells CBS13 they don’t track how many schools have.

Neither the state nor county departments of education track district policies, which the state calls a “local decision.” It also appears no agency or organization is tracking school-related sexual misconduct state-wide.

The California Department of Education tells CBS13, “CDE does not track this information. Formal complaints regarding educator misconduct are to be submitted in writing to a school, district, or county office of education.” However, when CBS13 reached out to local school districts, we found their policies for tracking sexual misconduct varied greatly.

“The districts have not put policies in place that are proactively addressing these issues,” Dodson said.

But Mireya says it’s too late for her daughter and she says she’s learned a virtual lesson of her own.

“Don’t trust anything, even if it comes from the school,” she said.